(Clearwisdom.net) The Christmas Eve audience for the Holiday Wonders show at the Beacon Theatre on Broadway in New York included local residents and tourists from around the world. It was a first-time experience for many attending a show presented by Divine Performing Arts. 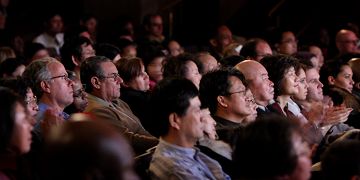 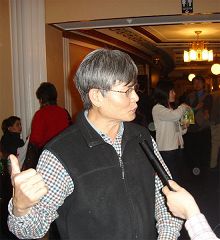 "'Drummers of the Tang Court' was inspiring, vividly displaying the moral integrity of the Chinese people" 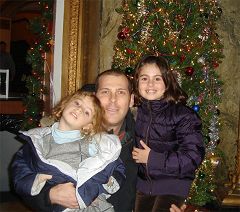 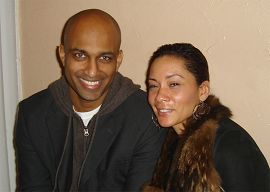 Owner of a consulting company in New Jersey and his wife 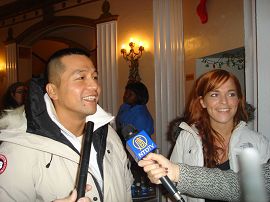 A businessman of Chinese ethnicity from Denmark and his girlfriend

"Falun Gong is so beautiful and peaceful"

Anna Greyer from Pennsylvania and her friend Rosemary Mitchell from San Francisco watched the show on December 25, and said that each performance was terrific.

Anna likes to do qigong exercises. She has heard about Falun Gong, but she has been reluctant to try it due to the lies spread by the Chinese Communist Party. Rosemary had thought about learning more about Falun Gong. After watching the show, Anna said the three words "Truthfulness-Compassion-Forbearance" were deeply implanted into the depths of her heart. Her favorite program was "The Power of Awareness." It completely changed her impression of Falun Gong. She said, "Falun Gong is so beautiful and peaceful."

An overseas Chinese in New York: The show makes me proud to be Chinese

Herman, 24, is an overseas Chinese studying in a New York medical school. He accompanied his elderly grandmother to attend the Holiday Wonders show on Christmas Eve. He said that it was the first time that she has watched a show in the theatre since she came to the U.S. over forty years ago. Herman said that the show is excellent and "makes me proud to be Chinese."

Fashion model from Latvia: Chinese culture will take the lead in fashion

Anna, a professional fashion model from Latvia, said that she was moved by the profound inner connotations of Chinese culture. She said that the performers' costumes were gorgeous, as the colors were incorporated appropriately into the theme of the show.

"I was moved by China's profound culture from watching the show. The dance movements contained deep meanings, expressed the inner world of the dance performers, and portrayed Chinese stories. I have a strong feeling that each dance number conveys a profound message, and each dance tells a story," said Anna.

Edward, a dentist, accompanied Anna. He said that the performance was different from any other performance he had ever seen.

Tourist from Mexico: Every performance was very good

Antonio Pacanias was on holiday in New York with his wife and two daughters. They chose to watch the Holiday Wonders show on Christmas Eve. Pacanias said that each performance was great, and that he enjoyed the show very much. He particularly liked the tenors, and the drum piece was very impressive, too. His wife loved the Chinese dances.

A Chinese businessman from Denmark: The show reminded me of my childhood

A. Yong and his girlfriend Mima were on holiday in New York. Mima loved the dances, and in particular "Drummers of the Tang Court." Yong said that the vocalists were outstanding. He was very much impressed by the song "Finding the Truth" sung by Bai Xue. The "Lady of the Moon" dance reminded Yong of his childhood, and of a story his mother used to tell.

Doctor: "Holiday Wonders is much better than shows I've seen in China"

Dr. Steven Gerst said that the performance was wonderful and his favorite was "The Fruits of Goodness." He was captivated by stage backdrops that were full of thick Chinese classical taste, elegant and noble "flower pot" shoes and strong and thunderous drums.

Gerst is a native New Yorker, and a graduate of the Medical Institute at Columbia University. He often attends cultural performances in New York. He said that he had not seen such a wonderful performance for a long time.

Ellen is a teacher at a private high school in New York. She said that it was the third time that she and her sisters came to watch the show. It has become a holiday tradition for them. She said she wanted to introduce Chinese culture to all her students.

Ellen praised the beauty of the dances and music. She said the messages conveyed were very nice. If everybody in the world follows the principles of "Truthfulness-Compassion-Forbearance," the world would become incredibly beautiful.

Fashion designer said that the costumes were elegant and graceful

Jacob, a New York fashion designer, attended the show with his two daughters. He said that his daughters learned about the Holiday Wonders from an ad and wanted to watch the show very much. His older daughter Della is seven years old. She was particularly interested in the Chinese language. During the intermission, she learned to speak several sentences in Chinese. Her favorite performance was "Lady of the Moon.".

"The dancers seemed to fly onto the stage"

Consulting company owner Benaat and wife Seanne said that it was the first time that they had experienced a performance about China. They loved it. Benaat praised the perfect combination of modern taste and ancient traditions. Seanne liked the costumes and dances. She said that the dancers seemed to fly onto the stage.

City government official: It is very important to see such a performance in New York

James Durrah, an officer of New York City's Health Bureau, said that it was the first time that he watched a Chinese show, and it was wonderful. He particularly liked the dances "Lady of the Moon," and "Ladies of the Manchu Court." He said that solo vocalist Hong Ming's singing had powerful energy, mesmerizing the audience.