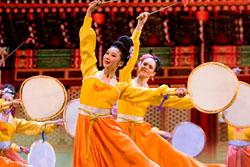 Set in China's mythical past, this dragon and lion dance is performed in celebration of the New Year, part of Holiday Wonders at the Beacon Theatre in New York.

China was once called the "Land of the Divine" and, according to ancient traditions, in China every part of society from farmers to scholars and emperors lived in harmony with "heaven," the Tao, the flow of nature. In turn, heaven bestowed upon China its gifts of culture, philosophy, painting, music and dance.

But since the 1950s, and especially during Mao's Cultural Revolution, much of the spiritually oriented culture has been lost under Communist rule.

"The Communist Party said 'religion is the opiate of the masses,' so during the Cultural Revolution, 2,000-year-old scriptures were burned, monasteries were just taken over, they destroyed so many things," says Can Sun, a native of China and a graduate student at Princeton University. He spent his formative years in China and it was only after coming to North America that he realized how the Communist Party was trying to teach some strange things. "For example, the idea that the party saved us from tragic, feudalistic ways of old China."

"The first time I saw the show was in 2004 in Toronto, where I did my undergraduate work," Mr. Sun says. "I experienced something that reminded me of the good things about my own heritage. In China, there's been a New Year's celebration concert, but it's basically the ideas of the party. In contrast, what this show is doing celebrates traditional values taught by Confucius as well as in Buddhism and Taoism, concepts similar to Christianity, such as love and compassion. I grabbed a whole bunch of friends the next year, and then when I came East and saw it in New York, I was talking to some of the people from NTDTV and got involved as a volunteer."

Mr. Sun is one of hundreds of volunteers promoting Holiday Wonders and working behind the scenes supporting the legion of performers that make up the colorful show.

NTDTV and its producing partner Divine Performing Arts return to New York City this holiday season with Holiday Wonders, performed at the Beacon Theatre Dec. 18 through 26. Blending the charm of the East with the holiday spirit of the West, Holiday Wonders presents performances that range from classic European ballet to theatrical Chinese dances, all of which are introduced in both English and Chinese.

With costumes inspired by ancient scrolls, along with music that mixes technique from the West with music from the East, the producers have created Holiday Wonders to present the best of what 5,000 years of Chinese history has to provide. Mr. Sun says the show is a must-see for Asian audiences but he enthusiastically invites people from all cultures and ethnicities to enjoy it.

"It will give you a sense of Chinese history that hasn't been (tainted) by the Communist Party lens," Mr. Sun says, noting that Holiday Wonders cannot be performed in mainland China -- at least not yet.

"A lot of Chinese people don't even know about our own spiritual culture because of the (official Communist-approved) history we all have to learn from grade school up," he says. "(What Holiday Wonders) calls the 'divine history' is so named because it incorporates the Taoist doctrine of harmonizing yourself with the universe. There's this great 'way' of wisdom out there. It's different from the Western idea of an omnipotent being."

The various dances and the elegant costumes capture the stories of these ancient teachings. The costumes, created by principal designer Amy Lee and her team, are as much a part of each dance as the dance movements themselves. They are, in many ways, the palette on which the dance is performed.

The designers study Chinese paintings, frescoes and even statues to find the right look. They also consider an outfit's flexibility for dance movements and whether it is durable enough to withstand more than 80 performances. Before coming to the United States, Ms. Lee was a professor of fashion design and fashion history in China. Although her costumes take inspiration from different dynasties and ethnic regions, the Tang dynasty is her favorite. She says it reflects the zenith of Chinese culture, artistically, economically and politically. The clothes during this time drew on influences from India, the Middle East and Europe. Seeing the costumes of Holiday Wonders is like watching traditional Chinese art from the Tang and other dynasties come to life.

Founded in 2001 and based in New York City, NTDTV seeks to present traditional Chinese culture to Asian and Western audiences to promote an understanding of what is happening in contemporary China. The independent, non-profit network was established to serve and benefit the global Chinese community, conveying accurate news and information that hasn't been filtered through the Communist Party. Twenty-four hour programming covers North America, Asia and Australia by satellite. NTDTV is available in 16 metropolitan areas in North America, including New York City. Through Holiday Wonders, NTDTV hopes to create a kind of renaissance or rediscovery of ancient Chinese art, music, dance and philosophy -- the elements that once made the country the "divine land."

"It might be hard for Americans to understand, but in mainland China, the whole society is run by the Communist Party and the arts have to offer themselves to the views of the party," Mr. Sun says.

"That's why it was almost shocking to me when I first saw the show. There was such a moving feeling I got when I watched 'Holiday Wonders,' and seeing this part of my heritage that is so valuable. This was the first time I felt that feeling."

“Practitioners from Ningbo City, Have You Thought About This?”