(Clearwisdom.net) On January 9 and 10, two New Tang Dynasty TV Spectacular evening shows were performed at the Kodak Theater in Hollywood, California. The shows presented a feast of traditional Chinese culture and values, which touched the hearts of the audience of more than 6000. Regarding the ongoing interference of the Chinese Communist Party (CCP) to the Spectacular, including the cancellation of the show in Korea, many from the audience expressed their indignation and condemned the CCP. 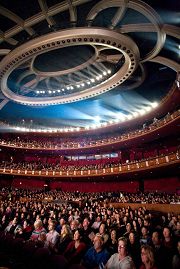 Second show of the NTDTV Spectacular in Los Angeles

Some of the proclamations that the Los Angeles NTDTV Spectacular received

Hollywood: A Great Movie Without Dialogue: The Chinese Authoritiesâ€™ Interference is Despicable

A Hollywood actor brought his wife and daughter to the show. He said: I didnâ€™t know what the show would be like and I feel that it was the best after we watched it. We have always been expecting the best, and I got it tonight. The songs and choreographed dances are amazing. Next year, I will bring my coworkers and buddies to the show. It provided people with different backgrounds an opportunity to appreciate Chinese culture, and my daughter loves this show. Because I am an actor, to me, this show is just like a movie, a great movie without dialog.

He found hard to understand why the CCP would interfere with the NTDTV Spectacular, he said: It is very despicable.

His wife said that she felt very touched by the performances and she loved the touching songs the most.

James Van de Water: The Chinese Regime Cannot Stop the Show from Going to the World

James Van de Water, vice president of Citizens for Global Solutions, said at the VIP reception of the show: We saw a brochure of the show in San Diego and we are waiting to see the show with much expectation. I think this show is the best presentation of Chinese culture and history.

Mr. Water said that cultural performances are not only entertainment, but also are presentations of the spirit of a civilization. The Chinese traditional culture has a long history, and human civilization would not be complete without the Chinese civilization. For the world, the world will not be a completely free world if the Chinese people have no freedom.

Regarding the CCPâ€™s interference, he said: They perhaps can cancel a few shows, however, they can not really stop you from bringing the show to the world.

Jeffrey Henderson, a talk show host of KLAS89.7FM, came to the Kodak Theater two days before the Spectacular to promote the show. After watching the show, he said: "Great, wonderful, it is very exciting! So many colors and so many different things were assembled together. Excellent!"

On the morning of January 8, the largest US Spanish TV station, Univision 34, and Los Angeles TV station KTLA 5 invited Spectacular host Leeshai Lemish and several artists to studios in their morning shows to introduce the Spectacular. The programs were 10 minutes and 12 minutes long, respectively. Leeshai introduced the history of the Chinese New Year and the NTDTV Spectacular, and the artists performed several highlights from the Mongolian Bowl Dance and Lion Dance.

The KTLA program can be viewed online at http://ktla.trb.com/news/local/video/: Select Feature, and then choose 1/8 Chinese New Year performances from the list.

Vietnam War Veteran: The Interference of the Chinese Communist Party is Not Surprising

Mr. Ronnie Guyer is a veteran of the Vietnam War, and he attended the VIP reception on behalf of state assembly member Van Tran. He expressed his respect for NTDTVâ€™s courage in reporting true stories. When he learned that the Spectacular in Seoul was canceled due to pressure from the CCP, he said that he knew very well how bad the communist party is as he dealt with the Vietnam Communist Party for many years.

"Such interference from the CCP was not surprising and we donâ€™t fear them. Please inform me any of your future events." He said.

After the show, Mr. Guyer said that he found that every dance had deep meaning, inspiring the inner desire for goodness.

Taiwanese Association Director: It is Completely Unreasonable for the CCP to Interfere with such an Outstanding Show

After the show, Pinghsin Li, the director of the Taiwanese Association of Los Angeles, said that the show was very impressive from its stage design, choreographed dance performance to the songs, and gave everyone great holiday entertainment.

Li said that the performances conveyed the essence of traditional Chinese values. For example, Dance "Mulan" emphasizes filial piety; the Dance "Yuefei" depicts the expectations of a mother for a son and the principle that citizens should position the interests of the nation first when one cannot meet the calls of loyalty to both country and family; the dance "a Dunhuang Dream" unveils the glory of Buddhas, purity and grace, inspiring peopleâ€™s respect for nature.

Regarding the Korean National Theatre's cancellation of the NTDTV Spectacular due to pressure from the Chinese Communist regime and the regimeâ€™s interference in the Los Angeles show, including harassing sponsors of the show, Li said that the regimeâ€™s tactics are to beautify anything they fond of and demonize anything they dislike. It restricts religious freedom, freedom of expression and the press, and paints everything with some political color. In the free United States, its interference to this outstanding show is unacceptable and unreasonable.

Li said that the Chinese Communist Party has nearly destroyed all traditional Chinese values. While foreigners are treasuring our proud heritage, the regime pays no respect to Chinese culture. It is completely unacceptable for the regime to suppress this cultural show presented by the NTDTV.

Mr. Wei Wulien, the director of the Taiwan Trade and Culture Office in Los Angeles said: "The performances are of very high standard and rich in content. From costume, music to stage props, everything was planned carefully and of very high standard. In addition, it was held at the famous Kodak Theatre. Great work, I am very proud.

Mr. Wang Shengsheng, the secretary of the American Confucianism Association, said that the performances are very traditional and very beautiful with a perfect marriage to modern technology. The stories of Mulan and Yuefei are both very educational and can help people understand the Chinese culture.

Mr. Chen Wenshih, director of the Taiwan Center Foundation of Greater Los Angeles, said that the NTDTV shows are his favorites He watched the 2006 NTDTV Gala, which was very good, and the Spectacular is even better, with more outstanding artists.

"It is very sad that the our excellent culture has been distorted to such an extent by the communist regime. The NTDTV Spectacular presented a very good way to connect our great culture to the world," Chen said.

Mr. Zhou Zhenwei, director of the Southern Coast Culture Center, said that the western worldâ€™s understanding of Chinese culture is still largely limited to lion and dragon dances, and this show very gracefully presents the essence of Chinese culture and is very inspiring.

Mr. Wangâ€™s mother was a very popular singer in Taiwan. He said that he was very touched by the show and felt very proud of being Chinese.

Wang said: One of the performances that impressed him the most was "Mulan". He had watched many times the Disney version of "Mulan". However, it was not until tonight that he gained some real understanding of this famous story of filial piety. The costume and backdrop display were also very outstanding.

Miss Taiwanese Teen USA: "I was born here, and donâ€™t have much opportunity to learn about my own culture. Through the show, I realized why we should embrace our culture and learn our dances. So I feel that this show is very good for me.

In the reception room, more than 30 proclamations and congratulatory letters to the Spectacular were displayed. In his congratulatory letter, Governor Arnold Schwarzenegger thanked NTDTV, the artists of the show and the California Chinese Community. The governor said that to remember rich traditions can not only help people better understand themselves, but also help people to cherish the multi-cultural society.