People from all walks of life in the Bay Area held a rally on September 9, 2006, at Garden Corner Square in San Francisco's Chinatown, to support more than 13 million Chinese people quitting the Chinese Communist Party (CCP) and its affiliated organizations. They also demanded an immediate release of lawyer Gao Zhisheng. 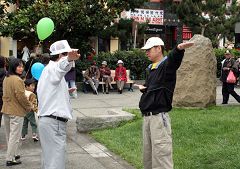 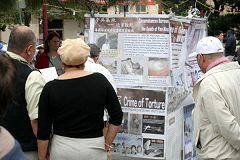 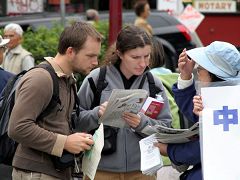 Listening to the explanation, looking at the materials, people are shocked at the cruel and horrific organ harvesting from living practitioners happening in China

Attendees all condemned the CCP's tyranny, especially the crimes recently exposed about the CCP harvesting organs from living Falun Gong practitioners for profit. They also celebrated the Chinese people's awakening after reading the Nine Commentaries on the Communist Party, and publishing announcements to quit the CCP and its affiliated organizations.

Falun Gong practitioner Wang Feng, a senior manager of a high-tech company in the Bay Area said that people quitting the CCP is a tide. It is also a future, and is a reality. One of his friends came back from China and told him that she heard people talking about the Nine Commentaries and quitting the CCP on many occasions.

Wang Feng called on people who have not quit the CCP to hurry and join in the mighty current of quitting the CCP, and not to be washed out by history when Heaven eliminates the CCP.

Lecturer Wu Junxiang from San Francisco City University and an electronic engineer in the Bay Area said that during the past seven years, more and more evidence of the CCP's brutal persecution of Falun Gong has been exposed, and it can no longer cover up the truth using lies and slander as before. Nevertheless, the CCP is very afraid of people quitting the CCP and its affiliated organizations. This can be seen clearly from the incident of Yuan Sheng, the pilot from China Eastern Airlines, who is seeking asylum in the United States. He was once detained and interrogated by the CCP police for spreading the Nine Commentaries and telling people about quitting the CCP. The CCP's illegal arrest and detention of lawyer Gao Zhisheng is also illustrative.

Wu Junxiang said that the reason that the CCP arrested and detained Gao Zhisheng is because he constantly, publicly revealed the cases of Falun Gong practitioners being persecuted. At the same time, he publicly announced his withdrawal from the vile CCP for being ashamed of continuing to be a part of the scoundrel party.

Wu Junxiang pointed out that actually many religions have mentioned "red evil dragon" and "evil specter that destroys the human world," but people have no idea to what they refer. Now, people can see clearly that the reference is to the evil CCP. It is against humanity, divine beings, and the entire universe. That is why Heaven will eliminate it. Its demise is imminent, therefore quitting the CCP has become a trend, and helps ensure peoples' safety.

At the rally, the organizer also held a truth clarification photo exhibit exposing the CCP's harvesting organs from living Falun Gong practitioners. Many passersby congregated and learned about the truth of this atrocity, and some passersby requested to learn the Falun Gong practice on the spot.

The Miguel couple from San Pablo saw the display boards exposing the CCP's live organ harvesting, and said that it was horrible. They wondered how such things could happen in this world. Miguel said that they liked Chinese culture very much, but such horrific things are still happening. They thought the American government should take action.

Antonis from Belmont said that he had learned about the CCP's atrocities, the same as what happened in former Soviet Union and presently in North Korea, but it was the first time that he heard about the atrocity of live organ harvesting in China. He was shocked. He said it is like the Nazi atrocities. He said he opposed such atrocities.