On July 27, 2006, the Oriental Daily newspaper in Kalmar, a city in south Sweden, published a long article on the CCP's atrocity of organ harvesting from living Falun Gong practitioners. 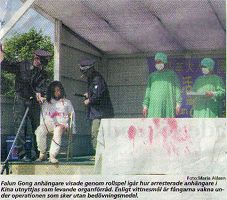 Reenactment of CCP's brutality of organ harvesting from living people

A re-enactment of the CCP's organ harvesting from living people was held on Borgholm Square one day before to protest the CCP's atrocities. Mr. Gustavsson said that Falun Gong practitioners in China had been persecuted and imprisoned in concentration camps.

The purpose of this activity was to tell the world what was happening in China.

Falun Gong is a kind of Chinese traditional spiritual cultivation. It is still spreading in spite of the persecution by the CCP. The CCP thought its power was threatened, so practitioners were arrested and tortured in labor camps.

According to the investigation report recently released by a former Canadian MP and a human rights lawyer, 60,000 organs were harvested during the years of 2000 to 2005, and sources of 41,500 organs could not be found.

The living prisoners of conscience have become merchandise for profit in China. Their vital organs were harvested when they were alive, without being fully anesthetized.