On July 30, the 22nd Chinese Athletic Federation in the Bay Area held an activity in Cupertino, California. The "Divine Land Marching Band", consisting of Falun Gong practitioners, joined this activity and performed there for the first time, winning an award. 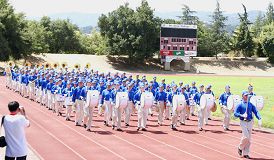 The Divine Land Marching Band performs at the opening of the athletic federation. 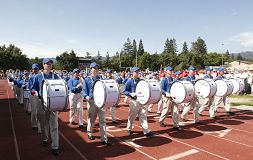 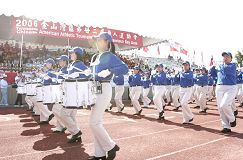 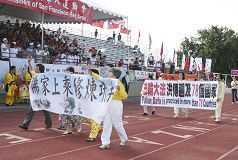 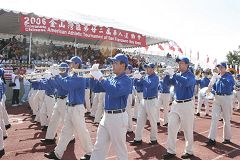 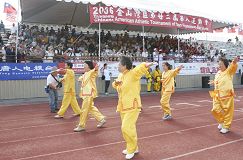 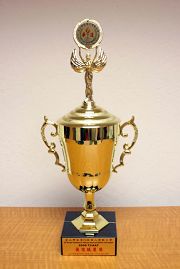 The trophy awarded to the Divine Land Marching Band

Ms. Yi Rong, one of the organizers, said that every group from the Chinese community is important. The Chinese Athletic Federation can achieve success only if every group attends. When speaking of the Divine Land Marching Band, Ms. Yi Rong said that they welcome the Falun Gong group. She said: "I have very high respect for them. It is not very easy to perform well and powerfully. They are a great group."

Ms. Yi Rong said: "Their performance is fabulous and professional. It amazed me." Before the end of the opening, the organizer invited the Divine Land Marching Band to perform three more songs for the audience.

Mr. Li said to the reporter: "I didn't know that the Falun Gong group had such a powerful influence in the Chinese community. They have done a lot of things. They are becoming a force that people cannot ignore. I respect them and wish them good luck."

Mr. Tang Xiaoxian, one of the organizers, said: "It is amazing that the Divine Land Marchin Band can perform so well three months after it was formed, considering many members didn't know how to play any instruments before."

Mr. Wang, a citizen from the Bay area, said that the performance made a very deep impression on him. He hoped that the band will perform again at the next athletic federation event.

“Queensland, Australia: Spreading the Fa in the Small Town of Esk (Photos)”

“A Few Words about Righteous Thoughts”