(Clearwisdom.net) On Sunday, Aug. 20, the recently established Divine Land Band joined other Falun Gong practitioners at Chinatown in Ansan, the city with largest Chinese community in Korea. They clarified truth about Falun Gong, distributed Nine Commentaries on the Communist Party and condemned the CCP atrocities of harvesting organs from living Falun Gong practitioners. They also called for release of recently arrested attorney Gao Zhisheng and expressed support of China Eastern Airline Captain Yuan Sheng, who sought asylum in the United States after being reported to authorities for trying to persuade others to quit the CCP in the Shanghai airport. 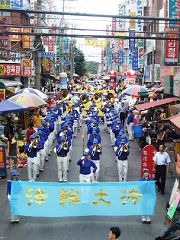 In the parade, Ms. Huang Xiaomin, Olympic silver medalist swimmer, led the parade in high spirits. The Divine Land Band shook the whole city and fascinated people in Chinatown. Their faces were filled with surprise. They listened to the band and got copies of the "Nine Commentaries." Some took pictures of this precious moment. Some talked to Falun Gong practitioners to find out more information. Some decided to withdraw from the CCP on the spot. Some watched the parade from their windows. Their look showed approval and friendliness.

People looked wide-eyed at the Divine Land Band. A practitioner told one Chinese who stood aghast, "Quit the CCP to secure a peaceful future. Hurry to quit the party!" Two of them said immediately, "Yes, I am quitting now. I am quitting now." They praised, "Falun Gong is great! When will you come back again?"

The music of the Divine Land Band reverberated in every corner of the streets. People are longing to hear it. Practitioners said that they will be back.