(Clearwisdom.net) Mr. Huang Yongzhong, a Falun Dafa Practitioner From Jieyang, Guangdong Province, passed away on the afternoon of July 21, 2006, more than 10 days after his parents brought him home from Beijiang Prison, where he was beaten and persecuted until he was in critical condition. 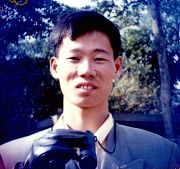 On September 9, 2001, Mr. Huang Yongzhong was illegally arrested while distributing Falun Gong truth-clarification fliers in Longwei Town of Jiedong. He was detained at the Jiedong Detention Center, where Wu, the center director, beat him with his fists and a belt and kicked him. While he was detained there, Huang Yongzhong was usually called out every day around 7 o’clock in the evening and beaten.

During Mr. Huang’s trial, he’d been so badly beaten that he couldn’t walk on his own. He had to be carried into the courtroom. The judge ignored all of Mr. Huang’s objections and the objections made by others on his behalf, and accepted the "evidence" presented by the police, which was full of loopholes, and sentenced Mr. Huang to seven years for the crime of "disturbing the social order." Mr. Huang appealed according to his rights under the law, but the Jieyang Court insisted on "upholding its original sentence." On November 10, 2001 Mr. Huang Yongzhong was sent to Beijiang Prison in Shaoguan.

In Beijiang Prison, steadfast Falun Dafa practitioners like Mr. Huang, who refuse to give up their beliefs, are held in dark cells, forced to do more work than others, not allowed to sleep, and are given unknown drugs in their food, causing their minds to become muddled. After he was there for a month, Mr. Huang was transferred to Supervision Area Number 12. While he was there, the guards and prisoners often beat him. He had injures all over his body and sometimes lost consciousness.

On July 2, 2006 Mr. Huang’s parents received two phone calls asking them to hurry to the prison. They were sure something was wrong and went to the prison with a friend. Prison officials told them Mr. Huang was in the hospital, so they went there in a hurry. When they finally found him he was shackled with handcuffs and leg irons to the hospital bed. He was too weak to even speak. A prisoner was assigned to watch him. His mother looked under the blanket and saw wounds from beatings all over his body. She angrily asked the prison personnel, "Why did you beat my son like this? Why is he still locked up?!" Forcing a smile, one of the people she asked said, "We are a civilized unit. Why would we beat him? He caused these injuries himself by struggling when we tried to examine him, and we had to immobilize him so he wouldn't move too much while we gave him an injection." Hearing this, Huang’s mother grew even angrier, "What kind of physical exams could give a person bruises all over his body, become unable to move or speak, and need a catheter?" The person continued to argue with her, saying, "His hepatitis virus has spread and caused his body to turn blue. Is it our fault that he got sick?"

At that time Mr. Huang’s mother noticed h his lips were very dry and looked like he hadn’t had water for a long time. She quit arguing and hurriedly gave her son some water, and then cut a piece of apple for him. Mr. Huang began to come around and he called weakly, "Mom." Then he pointed at the person from the prison and said, "...evil to death." He grabbed his friend’s hands tightly. It seemed like he had many things he wanted to say, but he was too weak to speak.

Mr. Huang’s parents requested their son's immediate release from prison for treatment, but the prison officials obstructed them in every possible way. They said they needed to report to the 610 Office, they needed to discuss it, and they needed several pieces of paperwork from the elderly parents. Mr. Huang's parents are honest farmers who are both more than 70 years old. They had no one to appeal to and they finally had to return home.

On the morning of July 5th Huang’s parents got up early and went to talk to the officials at the police station, the 610 Office, and other government offices, but everyone they tried to talk to pushed the responsibility onto someone else and refused to speak with them. His parents cried, "Our son is dying, and you’re still making trouble for us. If something happens to him, heaven won’t forgive you!" That evening his parents brought the paperwork, which they’d obtained with great difficulty, to the prison.

On July 6th the prison warden read the certificate, then he took out a piece of paper and asked Huang’s parents to sign it. The paper said the prison was not responsible if anything happened to Mr. Huang after he left the prison. Huang’s mother read it and yelled, "You didn’t ask me to sign anything when you took him away. Now he’s dying and you expect me to sign this? You persecuted him to this stage. You ask me to sign, you want to avoid responsibility for you actions, you’ve killed a man and now you want to wash your knife clean!" The warden was speechless due to the righteous condemnation of Mr. Huang’s parents. He sent for a vehicle, a few doctors and a police officer, who took Huang Yongzhong to the People’s Hospital in Jieyang. After he was settled the policeman told doctors, "This man is a criminal. If you can treat him, go ahead. If you can’t just let him go." Everyone was shocked by his words.

Mr. Huang Yongzhong was about 30 years old. He was born in Xinhe Village, Dongshan Town, Jieyang City. He was sickly as a child and suffered from epilepsy. Ten years ago, he lost four of his fingers in a machine accident. He became very weak due to the loss of blood. In 1997, Mr. Huang was fortunate to learned Falun Dafa. A few months after he took up the practice all of his illnesses disappeared. He became strong and his epilepsy never returned.

Because of the Jiang regime’s cruel persecution, and simply because he distributed some fliers, a man who lived his life by the principles of Truthfulness, Compassion and Tolerance was sentenced to seven years in prison. He was a disabled man who the government had promised to care for, yet he was persecuted to death because he refused to give up his beliefs.

“Organ Harvesting Investigation Leads: Mysterious Movements by the Administration of Justice in Shanghai”