On June 17, 2006, Falun Gong practitioners held a rally in Chinatown again to support ten million withdrawals from the Chinese Communist Party (CCP) and call on all circles to pay attention to and stop the CCP's persecution of Falun Gong. On the venue were banners in both English and Chinese, and posters exposing the CCP's crimes. 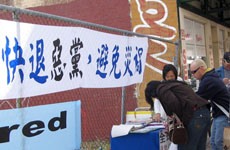 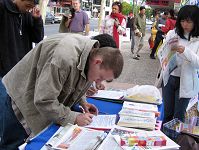 Signing to support withdrawals from CCP and against persecution

The event started at 10:00 a.m. along a busy street in Chinatown. With loudspeaker, Falun Gong practitioners explained the facts to the public and exposed the CCP's persecution of Falun Gong and the CCP's brutal crimes of live organ removal. They also called on kind-hearted Chinese people to renounce the CCP and related organizations. Due to limited space, only a few members of the waist drum team were able to play to support the rally, but the drum beats caught the attention of passersby, who stopped to view the posters and banners. The street was the only way for the Chinese tourist groups to go to lunch. Falun Gong practitioners warmly explained the facts to them and distributed truth-clarification materials.

A western lady took photos of the banners and posters. From heavy baggage on her back, one could tell that she was a tourist from far away. She told a practitioner that she was from England and had visited many places. In Melbourne, she saw similar activities of Falun Gong practitioners, and learned some facts of the persecution of Falun Gong in China. She said, "In today's world, how can a regime more brutal than fascist Nazis exist?! Regarding such barbaric inhuman persecution, everyone should not keep silent, but stand up to stop it. I signed the petition in Melbourne. I shall tell my friends about the persecution and have all people condemn the CCP atrocities."

A practitioner saw that an older Chinese person watched for quite a while, and then talked to him to explain the facts. The Chinese gentleman said with emotion, "I drove by and saw your activity. I stopped to take a look. You are doing a great job. The CCP is bad, too bad. For several dozen years, the CCP conducted many movements, one after another, and made Chinese people always worry about the safety of their lives. Now the CCP persecutes Falun Gong. Such a brutal regime, heaven cannot tolerate! I hope that you conduct more such events to awaken those people deceived by the CCP. Everyone condemns the CCP. It is destined to collapse."

The event was scheduled to end at 1:30 p.m. Because many people wanted to sign the petition to express their support, the event was extended to 3:00 p.m.