New York: A Parade and Rally Held to Support 15 Million Wise People Quitting the CCP and Its Affiliated Organizations (Photos)

(Clearwisdom.net) On Saturday, November 4, 2006, a clear and sunny autumn day, Chinese groups from all walks of life in New York held a grand parade and rally in the second largest Chinatown--Flushing--celebrating and supporting 15 million wise people who have withdrawn from the Chinese Communist Party and its affiliated organizations. The same day, on The Epoch Times website, the recorded number of people who have announced their withdrawal from the CCP and its affiliated organizations has reached 15,060,000. 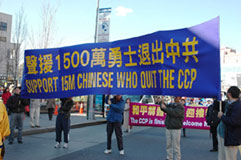 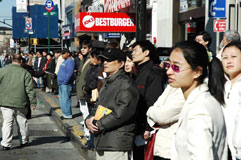 Passersby focus their attention on the parade

This milestone-recognizing event was coordinated by the Greater New York Area Service Center for Quitting the CCP, The Global Coalition to Bring Jiang to Justice, and other groups. The parade procession first gathered at the public library in Flushing. A huge banner bearing the message "Supporting 15 Million Brave People Quitting the CCP," with words and characters in white on a blue background in both Chinese and English, was extraordinarily eye-catching. The parade procession, vast and grand, included a lion dance, marching band, and a variety of banners and waist drums. As it moved forward on the busy Flushing road, it attracted the attention of many spectators. Many Chinese people took out cameras and video cameras to take photos, recording a precious historical moment.

At around 1:00 p.m. the parade procession reached the Flushing Shopping Center and held a rally. Guests from all circles gave speeches.

Mr. Wei, a volunteer at the Service Center for Quitting the CCP, talked about his experiences introducing the Nine Commentaries by making phone calls to Mainland China over the past two years. He included many lively stories. He discovered when making the phone calls that some people confused China with the CCP, thinking that loving the Party meant loving the country. Through patient explanation, many people agreed to quit the CCP. There were also righteous people who exposed the scandals in the Chinese prisons, such as slave labor, illegally harvesting organs from executed prisoners for profit, and extortion from families of the executed prisoners. Some people wanted to withdraw from the CCP and its affiliated organizations with their real names.

Mr. Xu Tianlin, a columnist with The Epoch Times living in New York, recalled the history of his family's suffering persecution by the CCP. His father was labeled as anti-revolutionary for being rich. After he graduated from university, China experienced a massive famine. Mr. Xu was hungry all day long. During the Cultural Revolution, his file was exposed, and he saw a statement in his file that said, "This person is a reactionary. He defended his father, who was anti-revolutionary, at the age of nine." Mr. Xu doesn't think that the CCP has changed for the better in the past 20 plus years since it has opened up to the outside world. China arrests more journalists and writers than any other country, and China executes more prisoners than any other country. The CCP started its persecution and slander of Falun Gong on July 20, 1999. Actually, the CCP is the biggest cult. Xu Tianlin called on the Chinese people to follow the ancient teaching: "To be rich, but not to indulge, To face force, but not to bend" and to quit the CCP and become a person with dignity.

“United Kingdom: Exposing the Persecution on the Streets of Leeds (Photos)”

“Mr. Wang Zhankun from the Hailar District, Hulunbeir County of Inner Mongolia Autonomous Region, is Tortured to the Brink of Death”