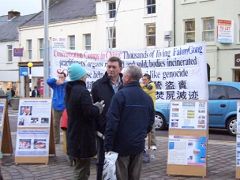 When clarifying the truth in Derry, though it was raining, local people were lining up, waiting their turn to sign the petition opposing the persecution. Such a scene was quite moving.

In Omagh County Tyrone, two Falun Gong practitioners went straight to the local Q101 Radio Station to clarify the truth of Falun Gong being persecuted by the CCP, and relate the purpose of this car tour to the host. The host immediately interviewed the practitioners and reported the news the same day.

At every destination Falun Gong local people responded warmly to the practitioners. One after another, they showed their sympathy and concern for Falun Gong practitioners who are being persecuted in China. They said that they felt it hard to imagine the persecution those practitioners are facing. Some people wanted to offer help by donating some money directly. The practitioners of the car tour thanked them saying, "We don’t accept money. What we are doing is just clarifying the truth to people so as to seek support from people all over the world and to end the persecution as soon as possible."

Within the duration of this car tour, though it was very cold and often raining, practitioners remained firm. Bad weather could not shake their resolve. Their only wish was to clarify the truth of Falun Gong being persecuted and to reveal the brutal nature of the CCP to everyone in Northern Ireland in order to stop the inhuman and bloody persecution launched by the CCP.

“Munich, Germany: Exposing the CCP’s Atrocity of Organ Harvesting from Living Practitioners and Supporting Withdrawals from the CCP (Photos)”