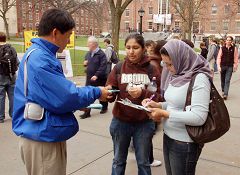 Passing out materials and collecting signatures 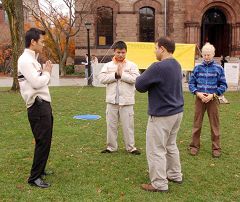 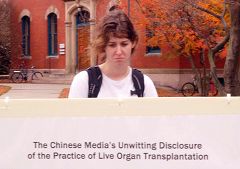 Shocked by the brutality of the CCP

The forum about the CCP's organ harvesting

Many students read the truth-clarifying materials and signed their names to support international organizations investigating the CCP's organ harvesting atrocities. Many people were shocked by the evil nature of the CCP and asked what they can do. Some students learned the exercises. A Chinese student told practitioners that he respects them.

At the forum, Dr. Wenyi Wang analyzed the evidence which shows the existence of the organ harvesting atrocities. Dr. Wang said that the CCP is anti-humanity. It not only lies to its own people, but also lies to the international society. She called upon international organizations to condemn the brutality of the CCP and help to stop the persecution.

“Indiana: Spreading the Fa at a Multi-Cultural Festival in Indianapolis (Photos)”