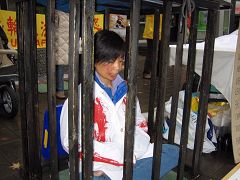 Torture re-enactment to expose the persecution of Falun Gong 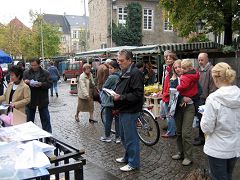 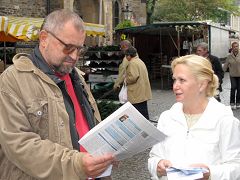 Citizens learn about the persecution

People in Ratingen enjoy walking, and do their shopping on Saturdays at the downtown market. Although October 28 was cloudy, very cold and from time to time rainy, when people passed the Falun Gong information stand near the market, they still stopped to take a look. Many came over to ask for information and said that they now understand the facts of the persecution against Falun Gong by the CCP.

When people heard of the atrocity of the CCP systematically imprisoning Falun Gong practitioners and harvesting their organs while they were still alive, they were astonished and many expressed their anger. Many people signed a petition in support of Falun Gong. Many said that we cannot just think of doing business with China and make money, yet turn a blind eye to this kind of atrocity as if human life had no value. They said that they wholeheartedly hoped the practitioners' anti-persecution efforts will succeed and will stop this brutal persecution happening in China.

“What I Know About Jidong Prison in Hebei Province”