On March 21, 2006, 14-year-old Xiaolong lost his grandfather, leaving the young boy and grandmother to fend for themselves. Xiaolong's grandfather could no longer live because of the pain, stress, pressure and anger he suffered due to the persecution of Falun Gong. Xiaolong could not accept the cruel reality, stopped eating the next 5 meals and could not stop crying. Yet, he never cried in front of other people. The poor child had already lived without the love and tender care of his parents for a long time, and now another hardship entered his young life -- his grandfather had left him too.

Zhang Xiaolong was born in Nangouxicun, Fangzi District Fenghuangjie, Weifang City, Shandong Province. Since he was 7 years old, he has been separated from his parents and experienced much hardship in his young life. His parents, father Zhang Chuanzheng and mother Guo Xiuhong are Falun Dafa practitioners. They were known to everyone in the village as very kind people. Since the beginning of the persecution (July 1999), they were illegally arrested, detained, and tortured many times. As a very young child, Xiaolong was forced to leave his parents and live with his elderly grandparents. Now, after his grandfather's death, Xiaolong and his grandmother have no funds for daily living.

Seeing the elderly lady and the quiet, unfortunate child, everyone with a kind heart felt pain for them. Their house is falling apart and is full of cracks and leaks.

Seen from a distance -- three rooms at the north side are standing, but three on the south side have fallen down already 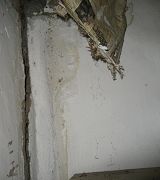 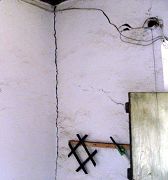 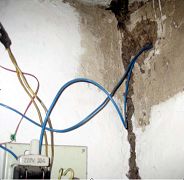 Cracks in the wall

Before Jiang's cohorts started the persecution of Falun Gong, Xiaolong's parents lived by the principles Truth, Compassion, Forbearance, and they were honest and hardworking people. Xiaolong and his parents lived in harmony. On October 2002, his parents, who had been already forced into homelessness, were both arrested by the Kuiwen 610 Office, and sentenced to three years of forced labor. In August 2003, they were sentenced to 10 years in prison for no legally valid reasons. They were taken to Jinan Prison for persecution. Xiaolong, who missed his parents at all times, slowly turned 14 without his parents' tender guidance. 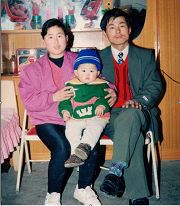 Xiaolong and his parents

Given his unhappy life, young Xiaolong has become very quiet. He does not understand why his parents were taken away, and why their happy family was broken apart. But, he knows that his parents, who cultivate Truth-Compassion-Forbearance, did not commit any wrongdoing. He is very mature for his age. He never cried in front of his grandparents and never said he missed his parents to them either. His school grades are always excellent, which gave some comfort to his grandparents.

I believe everyone with a kind heart feels the pain and injustice suffered by Xiaolong's family. But, do you know that during the seven years of persecution of Falun Gong, families like Xiaolong's are counted in the thousands. Thousands of families were broken apart, with loved ones lost to the persecution ¡V imprisonment, homelessness and also death.

On July 14, 1999, when Mr. Zhang Chuanzheng and Ms. Guo Xiuhong went to peacefully appeal in Weifang City, they were illegally arrested by the Gouxi Town Politics and Law secretary general, Song Changchun, and taken back to the town government where they were detained for about a week.

In October of 2000, Mr. Zhang went to Beijing to exercise his constitutional right to appeal for an end to the persecution of Falun Gong, but was again arrested. Along with some other Falun Gong practitioners, he was taken back to the Fangzi Detention Center by the town Politics and Law secretary general, Song Changchun. Having been persecuted at the detention center for two weeks, these practitioners were then transferred to the town highway station for further detention. Once they were detained they were handcuffed together. This meant that everything they did had to be done together, including going to the toilet and sleeping. They were forced to sleep on the cement floor. This lasted for almost two weeks.

Meanwhile, Ms. Guo Xiuhong and some other practitioners who weren't on their way to Beijing were also taken to the town highway station without just cause, where they were detained for almost a month. During the detention, Ms. Guo and other practitioners were cruelly tortured because they refused to renounce Falun Gong. They were deprived of sleep, and water was splashed on the cement floor that they were sitting on. Song Changchun and five or six police officers covered the heads of the female detainees with gunnysacks. They then put wooden rods under their legs and stomped on them while hitting and beating their heads, faces, and bodies. They also shamelessly pinched the inner thighs of the female practitioners.

Once, Ms. Guo was violently knocked down, making her crawl along the floor in pain. Her tormentors then turned her over so that she was facing upwards while they viciously kicked and stomped on her. The town Politics and Law secretary general, Song Changchun, brutally kicked and stomped on her lower abdomen causing her bowels to malfunction for many days. Sometimes such brutal beatings would be repeated twice a day. Their persecution means were extremely cruel.

In late fall of 2001, Du Longcai, director of the Gouxi Police Station feigned kindness and deceived Mr. Zhang Chuanzheng into going with him to the police station. He then detained him. After more than ten days, Mr. Zhang was able to leave the station with righteous thoughts, but to avoid further persecution, he had to become homeless, leave town and look for part-time work. The town official Guo Zhengshan frequently went to Mr. Zhang's home to harass his wife, Ms. Guo Xiuhong. He harassed her so much that she too was forced to leave home and find part-time work out of town.

On August 4, 2002, Mr. Zhang Chuanzheng was arrested by the Fangzi Public Security Bureau while at his mother-in-law's home. After one month's confinement at the Bamalu Detention Center, he was taken to Changle Forced Labor Camp.

In late August 2002, after his release from the forced labor camp, Mr. Zhang reunited with his wife, but they still couldn't go home. Their child had to live with his grandparents. At the end of October 2002, before the eve of the 16th National Congress, Mr. Zhang and Ms. Guo were both arrested during a mass search for Falun Gong practitioners by the Chinese Communist Party authorities. Both were detained at the Kuiwen Detention Center, where they suffered inhuman persecution. During their detention, family members tried to visit five or six times, but were denied visiting rights.

Two years later, under the direction of the Shandong Province 610 Office, the court changed the previous "light" verdict of three years and transferred Mr. Zhang Chuanzheng and Ms. Guo Xiuhong back to the Kuiwen Detention Center for ten years in prison. On August 5, Mr. Zhang and Ms. Guo were taken to Jinan Prison for further persecution.

The mother of Ms. Guo Xiuhong is around sixty years old. She traveled a long way to Jinan to visit her daughter and son-in-law and was travel-worn and weary. But her request to visit was rudely and unreasonably denied at the prison gate. The elderly lady pleaded with the receptionist and said, "It is not easy for an old person such as myself to come here." The official just berated the innocent lady, saying, "You deserve to be worn out!"

The leaders of Police Department of Kuiwen District, Weifang City: