Ms. Marie-Francoise Lamperti, president of the French human rights organization Agir pour les Droits de l'Homme, recently met with Laurent Billi, the Foreign Affairs Advisor for President Chirac. During the meeting, Ms. Lamperti emphasized the severe persecution of Falun Gong and asked the council to pass a letter from the French Falun Dafa Association to the President. In the letter, the association urged Chirac to have an open dialogue with the Chinese Communist government on human rights and urge it to end the persecution of Falun Gong. 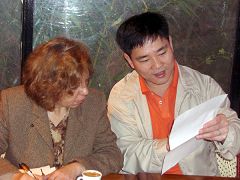 Ms. Lamperti also asked Mr. Billi to pass on a letter from David Kilgour and David Matas along with their investigation report on organ harvesting atrocities. In the letter, the two investigators urged President Chirac to pressure the Chinese regime to open all prisons and labor camps to international investigation. Ms. Lamperti also signed this letter.

Ms. Lamperti said: "During our meeting, we talked about the fact that members of the Falun Gong spiritual movement are being detained, tortured, and killed for organs and the fact that there are concentration camps in China. We demand the Foreign Affairs Advisor to tell Chirac that all these allegations are real and we urge the President to pressure the Chinese government to accept international investigation. As a human rights organization, we expressed our concerns. We hope that French researchers will not become accomplices of the cruel organ trafficking."

In reply, Mr. Billi said: "Any researcher who is participating in this cruel practice will be held responsible according to French laws."

Before President Chirac's visit to China, Mr. Billi met with representatives from 16 human rights organizations to listen to their observations and requests on human rights in China.

“Finland: Clarifying the Truth During the European Union Meeting (Photos)”

“Break Through the Old Forces' Arrangements and Facilitate What Teacher Wants”