In July 2005, our whole family went to an island in Spain for vacation. My daughter Lishi is nine years old. Like any kid, she likes to play, and she was having a great time. One day she came back from swimming and then took a bath. She was singing in the bathtub until suddenly she started crying. "Mom, please come, I'm hurt!" I rushed in to find that she had fallen down. She did not know how it happened, but she felt pain in her left wrist. There was a small but deep cut on her wrist, and it was bleeding. I said to her immediately, "Lishi is a little Dafa disciple. Don't worry, a Dafa disciple will be fine." She repeated after me, "Dafa disciples shouldn't worry, Dafa disciples will be fine," while I examined the injury. She could not unbend her arm or turn her wrist. When I pressed her swollen wrist, she cried out loudly.

As a doctor, I was concerned that it might be a fracture. But as a practitioner I understood that if she only remembered she was a Dafa disciple, she would be fine. So I led her to say, "Dafa disciples will be fine." My husband, who is not a practitioner, came to ask, "What happened? Go to the hospital!" My daughter and I both said, "It's fine. It's fine." After two or three minutes, I helped her put on her clothes. She said, "Ah, it's become smaller." The swelling had gone down and she was able to straighten out her arm. I played Teacher's lecture and practiced the exercises with her. 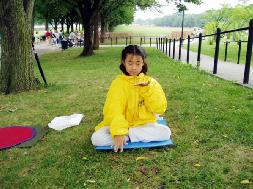 Lishi practicing the exercises during the DC Fa conference in 2004.

To my surprise, she was able to almost finish all of exercise two. She also did exercise five for a whole hour for the first time. Usually she stops to play after a short while. There is no Minghui School here, and there are no other kids to practice the exercises with her. Later she told me that when she practiced the first set of stretching exercises, she felt pain in her wrist. The pain then diminished by the second set, and by the third set, there was no pain at all. I asked her to wiggle her hand. She could move very freely, as if she were not injured at all. It was really wonderful. My heart filled with appreciation for our great and compassionate Master. Teacher protects Dafa disciples every second.

Normally an injury like this will take a long time to heal. The more the joint is used, the harder it is to mend. One might even need to operate, insert a metal pin, and wear a cast. The pain might continue even after it is healed, and the joint may never function properly again. Even with the best doctor, it is hard to recover completely.

After the incident, we discussed what we had learned: If she remembers that she is a practitioner when she falls down, she will be fine. She also recalled what Teacher wrote in Zhuan Falun, about an elderly lady who was dragged by a car for several meters. Because she remembered that she was a practitioner and should be fine, she was fine. Although my daughter remembered a little late that she was a Dafa disciple, she still recovered quickly. The righteous thoughts of a practitioner can rectify any incorrect state.

Our vacation is over. We left that beautiful island. The sunlight, the ocean waves, and the sandy beach are a beautiful memory, but we hope this amazing story of my daughter's recovery can awaken more compassionate people.

“Cultivating Diligently Through Reciting the Fa”