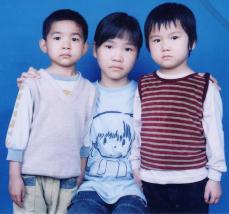 Mr. Zen Yuwen was a practitioner from Heyuan City, Guangdong Province. In June or July 2000, he went to Beijing to appeal for justice for Falun Gong for the third time, and the police arrested him. On a train heading toward Guangzhou City, he jumped off, trying to escape from the police officers. Unfortunately, he died from the fall. He had a daughter, and his wife Ning Haiying was pregnant. Ms. Ning later gave birth to twins, a son and a daughter. With three children, she was barely able to manage the small grocery store that her husband left her.

In March 2004, Ms. Ning was diagnosed with cancer. After she was hospitalized for about a month, she passed away. Mr. Zen's eldest brother is now taking care of the three orphans.

The three orphans are:

“Live with Dignity, Uphold the Truth -- Commemorating the Sixth Anniversary of the "April 25 Appeal"”