The grand annual Cherry Festival Parade in San Francisco was held on April 24, 2005. In order to help people in the San Francisco Bay Area to learn about the beauty of Falun Dafa, a number of practitioners took part in the parade and were warmly received by spectators. 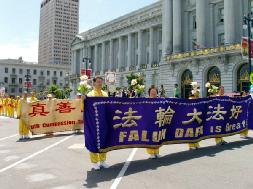 Practitioners' procession at the starting point

It was a sunny day on April 24. According to the parade organizer, this parade is one of the largest parades in Northern California conducted by Asians. The parade set off from the San Francisco City Hall and proceeded 2.5 miles to the Japanese area of town. It was estimated that 150,000 people watched the parade. Several local major media outlets also came to conduct on-site reports of the event. 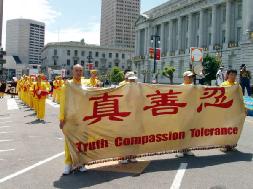 A banner reading, "Truthfulness, Compassion, Tolerance" in Chinese and English 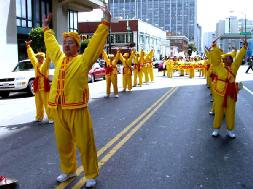 When the practitioners' procession passed by the reviewing stand, the event organizer introduced Falun Gong to the spectators and media and talked about the worldwide spread of Falun Gong When he saw the words on the second banner, "Truthfulness, Compassion, Tolerance," he repeatedly commented, "Wonderful! Wonderful!"

“Ms. Guan Peichun, Employed at the First Military Medical University, Died as a Result of the Persecution in 2003”