The Houston Southeast Community College World Festival was held from March 29 to March 31, and the event attracted many students and faculty members, as well as people from other universities, banks and hospitals. Falun Gong practitioners from Houston participated in this event to help more people know about the practice and the ongoing persecution in China.

Students and faculty members came to the practitioners' booth for information

The first day of the festival featured a variety of performances, and the practitioners' exercise demonstration attracted the attention and interest of many students and faculty members. The second and third days featured an exhibition, including crafts, food, tourist products, medical equipment, and other items from around the world. The Falun Gong practitioners' booth attracted many visitors, with people coming in a nearly continuous flow to request information. People responded well to the five sets of Falun Gong exercises, and they couldn't understand why such a good practice is being persecuted in China. 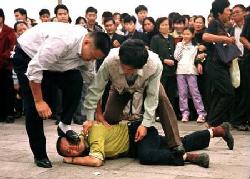 Pointing to the photo above, a student asked: "Why has this happened?" 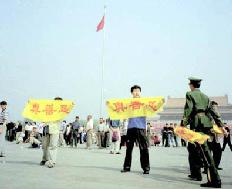 Another student asked about a photo that showed policemen trying to arrest two practitioners for displaying banners with the words, "Truthfulness-Compassion-Forbearance." He asked, "Why did they do that?" A practitioner then told him, "In China, there is no freedom of belief. Falun Dafa practitioners believe in 'Truthfulness-Compassion-Forbearance" and they have been arrested simply for saying 'Falun Dafa is great' on Tiananmen Square. The practitioners then would be subject to torture and detention. Their rights of belief have been deprived by the authorities, so they go to Tiananmen Square to peacefully appeal."

A professor said. "I have obtained a copy of the book, Falun Gong. However, I still have some questions. Why was it legal to practice Falun Gong before July 1999 and then illegal afterward?" A practitioner answered, "It was because of fear and jealousy on the part of former Chinese president Jiang Zemin. Jiang could not put up with the fact that Falun Gong practitioners outnumbered Chinese Communist Party members." The professor then asked, "Wouldn't it be even better if there were more good people in China? Wouldn't it benefit the nation? Why would they persecute Falun Gong?" Another practitioner said, "Many people have asked this question. The reason is that the Chinese Communist Party (CCP) has been continuously controlling people's minds, and the party and Jiang fear losing such tight control; they are afraid that no one will believe in the CCP anymore."

The practitioner added, "In China, there is no freedom of belief. All media outlets repeat the same lies. As media outlets in other countries have been quoting those lies, Chinese people living abroad have been also poisoned by the propaganda. Jiang's regime has also exported its persecution to foreign countries. For example, because of conducting peaceful appeals in front of the Chinese Consulate here in Houston, several Chinese practitioners were not granted passport renewals, and their family members in China have been repeatedly harassed."

The professor said, "You're right, I have heard that the Chinese Consulate called the college to request not allowing a photographer who is a Falun Gong practitioner to come take video clips of this event." 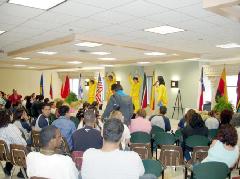