According to a Chandra X-Ray Center News Release on March 23, 2005, peculiar outbursts of X-rays coming from a black hole in the galaxy Messier 74 (M74) have provided evidence that the black hole has a mass of about 10,000 Suns, which would place it in a possible new class of black holes. These outbursts were observed with NASA's Chandra X-ray Observatory. 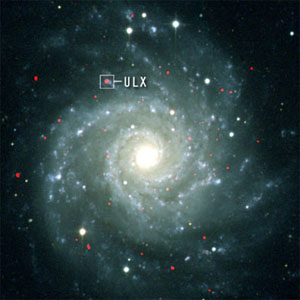 This composite X-ray (red)/optical (blue & white) image of the spiral galaxy M74 highlights an ultraluminous X-ray source (ULX) shown in the box. ULX sources are distinctive because they radiate 10 to 1000 times more X-ray power than neutron stars and stellar mass black holes. Chandra observations of this ULX have provided evidence that its X-radiation is produced by a disk of hot gas swirling around a black hole with a mass of about 10,000 Suns. Credit: X-ray: NASA/CXC/U. of Michigan/J.Liu et al.; Optical: NOAO/AURA/NSF/T.Boroson

Astronomers used Chandra to observe a black hole in the galaxy Messier 74 (M74), which is about 32 million light years from Earth. They found that this source exhibits strong, nearly periodic variations in its X-ray brightness every two hours, providing an important clue to the black holes' mass. The black hole also fell into a class of sources called ultraluminous X-ray sources (ULXs) because they radiate 10 to 1000 times more x-ray power than neutron stars and stellar mass black holes. The observed two-hour variation implies that this ULX has a mass of about 10,000 Suns.

“Northern Europe: Falun Gong Practitioners Call for an End to the Persecution (Photos)”