(Clearwisdom.net) (Summary report by Minghui/Clearwisdom correspondent) Hu Jintao arrived in Madrid on November 13, 2005 to begin a two-day state visit. Falun Gong practitioners called for an end of the persecution of Falun Gong in China. 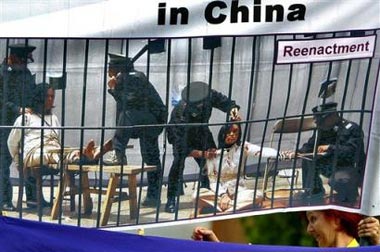 Practitioners hold banners and appeal outside the Chinese Embassy in Madrid

The BBC reported on November 13 that this is Hu Jintao's first visit to Spain since he became the Chinese President. On his European trip, Hu has encountered many protests.

Last week during Hu's visits to Britain and Germany, human rights groups such as Amnesty International also held protests. In Madrid, Spain, Hu encountered more than 50 practitioners peacefully demonstrating when he arrived at Prime Minister Zapatero's Office. They held banners that read, "Bring the criminals to justice" and "Stop the persecution".

Several days ago, Falun Gong practitioners filed charges of genocide against a member of the Chinese government in Spain's high court. Petitioners plan to appeal outside the embassy next Monday.

Based on a statement from Amnesty International, tens of thousands of people are imprisoned in China and suffer from abuse and interrogation. Several thousand prisoners are sentenced to death without due legal process.

"So far, the Spanish government seems to ignore the fact that China is one of the countries where the greatest human rights violations occur and where international treaties are violated, with executions, torture and mistreatment, arbitrary arrests, forced evictions, restrictions of freedom of expression and other serious abuses," Esteban Beltran, president of Amnesty's office in Spain, said in a statement.