Living Up to the Standard of a Cultivator

(Clearwisdom.net) One day, as an elderly Taiwanese man was walking along the road, a fast-moving motorbike suddenly knocked him to the ground. The old man rolled over on the ground twice. After he collected himself and stood up, the first thing he did was ask whether or not the person who had hit him was injured. The people around him replied, "The driver took off right away. Why do you only care about others and not think of yourself? You are very old. Are you injured?" When the old man finally looked himself over, he found no injuries. 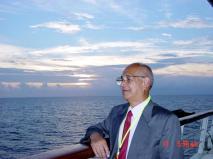 This man is 83 years old. He is in good health, speaks in a firm voice, and has a powerful stride. He not only lacks the signs of old age that most people his age possess, but also has the smooth skin of a middle-aged person with very few wrinkles. Mr. He Chao has practiced Falun Gong for 10 years. He always has a compassionate smile and is often regarded as a living endorsement of the great benefits of Falun Gong cultivation. The following is his story: 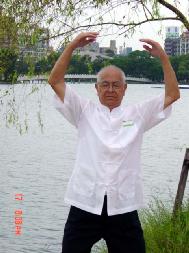 Acupuncture and qigong lead to cultivation

After Mr. He retired from government employment, he pursued his interest in the study of acupuncture. "Most beginning students of acupuncture practice on other people and do not dare to practice on themselves. I was different; I always tested the acupuncture on myself. I personally tested over 200 points, penetrating each point several times, and then compared my results with the records in the book." This is the level of responsibility Mr. He employs. After becoming thoroughly acquainted with acupuncture, he began to treat others for free. In time, he earned a good reputation.

"Sometimes I did not have my needle box with me, or there was no proper place to do acupuncture, so I could not help always help everyone. But I always had the wish to help people cure their diseases." Mr. He later discovered that, with the practice of qigong, he could help cure people's diseases with just his hands. Without the need for any tools, it was much more convenient than acupuncture. "So I went everywhere studying qigong and nearly used up all of my money. I studied all kinds of qigong. When I treated a person's disease, I used acupuncture and sent qi at the same time, with an even better result. Whenever I felt discomfort, I only needed to touch the painful area with my hand and the pain would disappear."

But Mr. He found that his patients' diseases only improved a little bit after his treatment, or recurred after a period of time. "Although I was able to cure my minor illnesses, I could not cure a chronic disease like gout. I had to take medicine regularly to control it. Even though I had learned many qigong practices and was good at acupuncture, I could not get rid of this illness."

In 1994 a friend of Mr. He returned from a visit to Mainland China. He brought Mr. He news of a remarkable qigong school that was very popular in China. Many people were learning it and the effects were amazing. This friend gave him a book called China Falun Gong and taught him the exercises. Mr. He had had many years of experience with qigong and had studied in many schools of qigong, but when he tried Falun Gong, he felt the energy was especially strong. So Mr. He decided right away to practice in this school.

When he studied the Falun Gong exercises and read the book, Mr. He's questions of many years were answered, including "Why can't I completely cure people's diseases?" and "Why can't I cure my gout with medicine, qigong and acupuncture?" After he took up the practice of Falun Gong, Mr. He's gout was completely cured without any medicine! For the past ten years he has enjoyed good health with no disease. He has personally experienced the wonder of Dafa!

After Mr. He became a Falun Gong practitioner, he learned that disease was caused by karma produced from doing bad deeds in many previous lives. Any medical treatment, including acupuncture or qigong, can only treat the surface, not the root cause, and can only provide temporary relief from illness. If one wants to eradicate the root cause of disease, one must truly cultivate virtue by following the principles of Truthfulness, Compassion, and Tolerance at all times. Only then can one gain and maintain good health forever. When he understood this, Mr. He stopped treating people with qigong and acupuncture, and instead, he taught them to practice Falun Gong. He studied hard and endeavored to spread Falun Gong everywhere in the province, and his life gained new meaning.

Mr. He's accident took place after a qigong performance activity. It was cold and windy, and he was walking with his head down when he was struck. "My first thought after I was hit was not to think of myself but to consider the safety of others. This would not have been the case before I began to practice Falun Gong. This incident confirmed once again for me that cultivating Falun Gong is really good!"

Last year, He Chao came across a group of tourists from Mainland China in the Forbidden City. Having experience with cultural relics, Mr. He acted as a guide, providing colorful explanations to the Chinese tourists. The group found it very interesting and quickly became friendly with him, laughing frequently. When they came to the cultural relics of Buddhism, Mr. He imparted the knowledge he had learned from his cultivation practice, and the tourists were amazed. Someone asked him what his college major was because he knew so much. When Mr. He told them he practiced Falun Gong, the atmosphere changed dramatically, and the group became stiff and cold. Mr. He told them, "In China you are only exposed to the propaganda of Jiang's regime, but now you have the opportunity to go abroad and can compare what you see for yourself with your previous understanding. Isn't there a big difference?" Although the group members had been given orders not to make contact with Falun Gong, they were sufficiently impressed to finally accept the materials Mr. He offered them to read.

“Facts of the Persecution”