My name is Gong Yongguo. I am 62 years old and a retired mineworker. Since I worked down in the pit all year round, I suffered from many diseases including headaches, tracheitis, asthma, rheumatism, and lumbago. I also had silicosis, a respiratory disease caused by inhalation of silica dust that leads to inflammation and scarring of the lung tissue. I had the good fortune to learn Falun Gong in November 1998. Within six months, Teacher had cleaned up my body and all of my diseases disappeared. 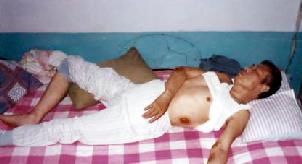 Gong Yongguo lost consciousness from force-feeding, and prisoners burned him badly all over his body.

Jiang Zemin began a nationwide suppression of Falun Gong practitioners on July 20, 1999, because of his personal jealousy. Falun Gong benefits society with no negative effects. I benefited both mentally and physically from practicing Falun Gong, and I should stand up to speak the truth: Falun Dafa is good.

I went to Beijing to appeal for Falun Gong on April 21, 2001. In Tiananmen Square I opened the banners: "Falun Dafa is Good," "Restore the Reputation of Our Teacher," and "Falun Dafa is Righteous." The police on Tiananmen Square took me into a vehicle that they had arranged for in advance for arresting practitioners. Inside the vehicle, the police beat and abused us and tore our clothes. Several other practitioners and I were later taken to the Chaoyang City Police Department Liaison Office in Beijing. They did body searches and confiscated my 300 "yuan". The next day we were handcuffed and sent to Beipiao City. I was interrogated at the Chengguan Police Station and then taken to the Liangshuihe Detention Center.

Practitioners were held in separate cells. On April 26, I went on a hunger strike to protest the persecution. They began force-feeding me food or salt-water on the third day of my hunger strike. I was force-fed four or five times in 13 days. I was tortured until I fell unconscious, so they sent to the hospital. They put me on a cold bed and ordered prisoner Dong to put hot water bottles on me, which resulted in severe burns. The scars are still visible two years later. (See photos.)

Gong Yongguo was badly burned all over his body.

I was hospitalized for over ten days. Afterwards they let my son take me home in order to avoid being held responsible for my condition. But the 610 Office didn't leave me alone and frequently came to my home to disturb me. One day Pei Hua came to my home with several people, including a TV station reporter, to put pressure on my family members. They threatened my wife, saying, "If your husband won't give up practicing Falun Gong, your son will be dismissed from his job." My wife was so scared that she had a heart attack and developed a mental problem. She forced me to write a Guarantee Statement and forced me to promise, on television, not to practice Falun Gong. I started crying, and, against my will, I said that I would no longer practice. This persecution has cost us between 4000 and 5000 yuan, which has caused tremendous suffering for my family. I was subjected to three years of forced labor but was released on bail to receive medical treatment.

In November 2002, as the 16th National Congress was about to open, police officers Bian Shugen, Zhang and Zeng abducted me and took me to the police station. They tried to tempt me by saying, "If you promise not to practice Falun Gong any longer, we will send you back." I said, "I will continue to practice to the end. Why should I give up such a good cultivation practice?" Finally they sent me to the Liangshuihe Detention Center and detained me for fifteen days.

“Mr. Feng Jianyong, a Practitioner from Xiangfen County, Shanxi Province, Died as a Result of Persecution”