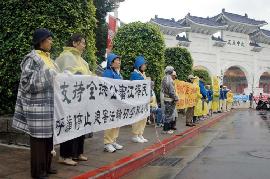 A report from AP on January 8 said that about 3,000 Falun Gong practitioners dressed in yellow and blue tracksuits formed a human chain 4 miles long through Taipei on Saturday to protest persecution of their fellow practitioners in China.

The report said that practitioners call the event as "Great Wall of Justice." Practitioners showed pictures of victims of the persecution. Chang Ching-hsi, chairman of Taiwan Falun Dafa Association, said at least 1,247 followers have been killed since Beijing outlawed Falun Gong.

Professor Chang said : "The scary thing is that none of those people showed violent behavior and yet they still suffered repression by the state."