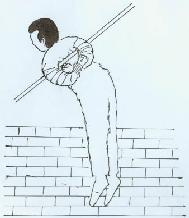 Yang Dehai used to be the director of the Wenquan Police Station in Xingcheng City, Liaoning Province. He is now the director of the Gucheng Police Station. When he worked at Wenquan Police Station, he led Zhou Zhenxing and two other policemen to torture Falun Gong practitioners who went to appeal in Beijing using a method of hanging. It is described as follows: The practitioner's two arms are forced to overlap behind the victim's back and they are bound tightly with nylon rope. Then, a wooden stick is placed under the arms across the victim's two armpits. The victim is then lifted up, and the two ends of the stick are placed on two chairs on top of a desk so that the whole body is suspended, with the feet hanging in the air. The weight of the victim's whole body rests on his armpits. Most people cannot take this torture more than twenty minutes, but the perpetrators torture practitioners using this method for two hours, usually causing numbness of both wrists that persists even for two months after experiencing this torture. 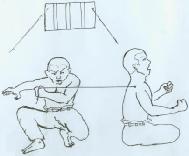 During his detention at the Xingcheng Detention Center, one practitioner suffered thirteen different kinds of torture. One is described as follows: Using a needle about 4 inches long, the police pass the needle through the victim's back so that a thin nylon line is sent through the flesh, just like sewing clothes. They then rub preserved salty vegetables into the stitches. The guards or warden order criminals to yank on the nylon line once in a while, causing excruciating pain.

This practitioner also suffered other tortures: they hit his penis with the soles of their shoes; they passed a needle about 4 inches through his penis; they rubbed his anus with a toothbrush; they put rusty nails in a plank and then hit his thighs with the nailed plank.