(Clearwisdom.net) Reporter Bai Zhongguo from Sport Seoul, a newspaper in Korea wrote an article entitled, "Falun Gong 'whirlwind' in Gangnam-gu" and reported citizens' enthusiastic participation in learning the Falun Gong exercises in Gangnam-gu, Seoul. Below is a translation or the report: 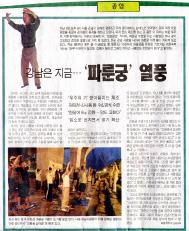 At about 9 pm on October 4, 2004, under a bridge in Gangnam-gu, more than 50 people, young or old, men and women were raising their arms high and holding a posture as if they were embracing a wheel above their heads. This posture that looked like setting-up exercises was one of the postures in one set of Falun Gong exercises called "Falun standing stance". These people who practice Falun Gong all looked very serene and sincere. Recently, an increasing enthusiasm is found among people in Gangnam-gu to practice Falun Gong. Ms. Lee who instructed the exercises every Monday, Wednesday and Friday evening since April said, "Sometimes, more than 100 people came to practice the exercises. Over the past few months, several thousands of people have visited here."

Falun Gong is warmly received in Gangnam-gu. The five-sets of exercises are easy to learn. In addition, the instruction is free of charge. What is more important is that this practice has a remarkable effect in improving one's appearance, losing weight and keeping fit and healthy. Hence it is widely praised.

Ms. Huang whom I met at the practice site said, "Since I started practicing Falun Gong, I have fewer and fewer wrinkles and I now look younger. Now, except for very basic makeup such as lipstick, I don't need to use other cosmetics". Miss Lee who started practicing Falun Gong at the end of June sighed with emotion: "My mind is much clearer. When I take shower, I often find my skin become more delicate." In fact, many of the Falun Gong practitioners I've met all have delicate rosy skin and they look much younger than their real age.

Among the practitioners, a great number of people have their arthritis, back problems, insomnia and gastric diseases healed through the practice of Falun Gong without any other medical treatment. Mr. Lee, who had suffered later-period kidney cancer, completely recovered through practicing Falun Gong. He said, "Five years ago, my kidney cancer cells proliferated to my bladder. Even my doctors gave up treatment on me. After I practiced Falun Gong, I'm completely recovered. During the process, I did not take a single bit of medicine." Perhaps it is because Falun Gong's remarkable healing effect, there are quite many practitioners are western or Chinese medical doctors.

However, Professor Lee from Gynecology and obstetrics department, who instructed Falun Gong exercises at another park said, "Healing illnesses is only a subsidiary benefit brought by Falun Gong. People do not only learn Falun Gong for healing and fitness, but through the cultivation of Falun Gong, they become to understand the principles of the universe and the criteria to distinguish good from bad. They've learned something at higher levels."

“Indonesia: Governor of Sumatra Proclaims Falun Dafa to be One of National Mass Sports (Photos)”

“Israel: Practitioners Introduce Falun Dafa and Expose the Persecution at the Beresheet Festival on the Shores of Kineret Lake (Photos)”