During the Mid-Autumn Festival (a traditional Chinese full-moon celebration in September), Zhou Jianfen, a Falun Dafa practitioner from New York, learned that her sister, Zhou Jianhui, had been arrested in April in Ningpo City, and was sentenced to one year in a forced labor camp. All of the Falun Dafa books and the computer in her house were confiscated. Her father visits her sister once every month, and gives her 1,000 Yuan (1) for living expenses. It was said that Zhou Jianhui was subjected to brainwashing and is forced to watch propaganda materials slandering Falun Gong. 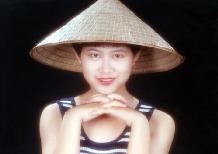 Ms. Zhou Jianhui, 27, graduated from Zhejiang Chinese Medical College. She was an excellent college student, and after working for two years in Hangzhou City, she planned to go to graduate school at Shanghai Medical University. In 2003, she went home in Ningpo City to prepare for the entrance examination.

Zhou Jianhui started to practice Falun Gong in 1999. After she practiced Falun Gong, she had become openminded and happy. However, the persecution started in China a few months after she started practicing, and she lost many Falun Dafa books. She was perplexed, and became confused and depressed about the senseless persecution.

The rapid development of the Internet enabled her to read news from various countries around the world. She learned the truth about Falun Gong, and being a kind person, she wanted to tell more people that Falun Dafa is good.

On May 12, 2004, Ms. Zhou Jianhui was arrested when she was distributing Falun Dafa truth-clarifying materials in the neighborhood where she lived. She was taken to the Police Bureau of Haishu District and was later sentenced to one year in Moganshan Forced Labor Camp, in Zhejiang Province.

(1) Yuan is the Chinese currency. The average monthly salary of an urban worker in China is 500 Yuan.