(Clearwisdom.net)On Sunday January 11, UK Falun Gong practitioners performed a play with the theme of bringing Jiang Zemin, the instigator of the persecution against Falun Gong that has claimed over 860 lives, to justice. Held in London's Trafalgar Square, the play, written by practitioners, symbolically tried Jiang Zemin for his crimes against humanity in this persecution. A demonstration of the Falun Gong exercises was also given, and practitioners performed a Chinese Fan Dance. The sight of the serene exercises and the graceful traditional dancing helped dispel the lies which the Jiang regime has spread against Falun Gong, and show the goodness of Falun Dafa.

The play echoed the reality of bringing litigation to bear upon Jiang Zemin for his crimes. Lawsuits around the world, in places such as the United States, Belgium, Spain, Germany, Korea, and Taiwan, have been filed against Jiang for Crimes Against Humanity, Torture and Genocide in persecuting Falun Gong. As more and more people around the world are coming to understand Jiang's crimes for themselves and to pronounce him guilty in their conscience and heart, more and more courts of law are accepting lawsuits filed against Jiang and his aides. The purpose of this event in one of the capital's famous tourist spots was to both demonstrate the guilt of Jiang Zemin in his persecution of Falun Gong and raise public awareness of the lawsuits. Many tourists and Londoners alike showed interest in the event and news of the lawsuits, standing to watch as practitioners distributed leaflets about Falun Gong and the persecution in China. 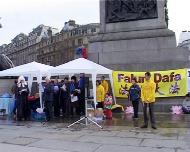 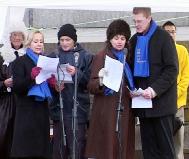 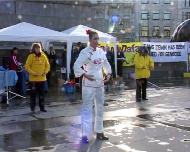 “A Retired Party Member Acknowledges the Value of Falun Gong”