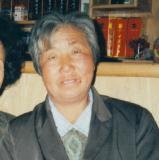 Ms. Sang Shuqing was a 63-years-old Dafa practitioner who lived in Haiyang Village, Nankouqian Town, Qingyuan County, Fushun City, Liaoning Province. Ever since she took up the practice of Falun Dafa, she has had both her mind and body purified. On July 12, 2001, she went to Beijing to validate the Fa. After she returned, the town police station and county police department tried all means to apprehend her. In order to avoid arrest, she was forced to leave home and wander around. While she was homeless, the police station and police department often came to her home to harass her family members, threatening them to turn her in.

In May 2003, 5 people from the town police station and county police department drove a white car and came to her home to arrest her. She managed to escape from the rear window. On July 12, 2003, she just came back from out of town when the police came again to arrest her. At around 8:00 a.m., a white car suddenly stopped at her home. Seeing the car, her grandson shouted, "The police have come to arrest you!" Sang Shuqing quickly got to the bed and planned to jump out of the rear window. Unfortunately, her head hit the window frame and she fell to the bed and died.

A staff member of the town government office had confirmed the death of Sang Shuqing on the phone.

During the past several years, the police have abused their power to arrest and harass Dafa practitioners. Sang Shuqing died of such persecution. This is yet another crime that Jiang's group committed. We hereby sternly warn those who are still following Jiang's order: good will be rewarded with good, and evil with evil. The time will soon come when the evil people will be punished.

“Facts of the Persecution Committed Against Falun Dafa Practitioners at the No.2 Detention Center of Fushun City in Liaoning Province”