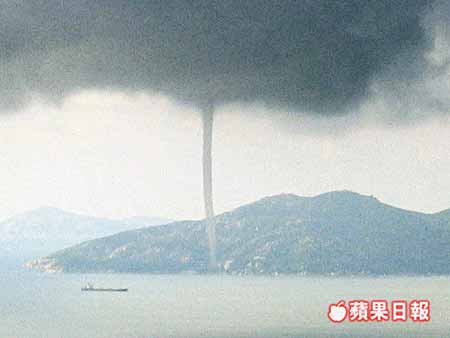 Mr. Xu, a local resident saw the typhoon yesterday morning and took video footage of it running over the sea. There was a small boat nearby, but it was not hit. The typhoon did not cause any loss in life or goods.

Mr. Xu told Apple Daily that at 7:30 a.m. yesterday he saw a typhoon running over the sea from west to east. The typhoon lasted over 10 minutes.

Mr. Tang Yu, Director of Science Department, Astronomical Observatory confirmed that the observatory also received report on the typhoon. A Westerner saw the cyclone south of Lamma Island at 8:30 a.m. and it lasted about 10 minutes.

Based on their records, from 1955 to June of last year, the observatory received 27 cases of typhoons and the most recent one occurred on the July 1st handover anniversary two years ago.