Washington DC Dafa Practitioners Hold Press Conference in Front of Chinese Embassy: Bring Jiang Zemin to Justice --No One is Above the Law (Photos)

On May 9, 2003, Washington DC Dafa practitioners gathered in front of the Chinese Embassy in spite of the rain and held a press conference about the lawsuits against Jiang Zemin proceeding concurrently in seven countries. The gathering was a part of activities to Bring Jiang Zemin to Justice. 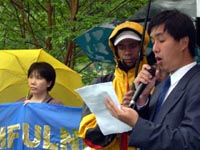 During Jiang's visit to the US in October 2002, some Falun Gong practitioners, as victims of the persecution, filed a lawsuit against Jiang and the "610" Office in a US Federal Court in Chicago. The court has already accepted the case.

The press conference started with a story of two doctors as recounted by Ms. Yu. Her friend in a hospital in Beijing, a doctor in charge of SARS diagnosis, caught the disease due to the government's cover-up of the epidemic. Another doctor friend of hers, US citizen Charles Li, was sentenced and imprisoned for clarifying the truth of Falun Gong and breaking the information blockade in China, according to news report from the Chinese government.

Matt, one of the speakers at the press conference, said in his speech that the persecution of Falun Gong and the spread of SARS are all part of Jiang's crimes. Currently, a global network to sue Jiang has been formed. He said that bringing Jiang to justice is everyone's duty, and that there were several lawsuits against Jiang and his associates in seven countries, including the US, Canada, Germany, France, Switzerland, Hong Kong, and Indonesia. Many people understand that Jiang has severely violated human rights in his persecution of Falun Gong and betrayed his own people for the sake of his own selfish political interests. Jiang cannot represent China.

One of the speakers at the press conference, Mr. Tao Wang, emphasized that Nazis and Yugoslavia's former president Milosevic faced trials after the end of the persecutions they perpetrated. Suing Jiang represents the first time in history in which a dictator is brought to court before the end of a persecution. This is significant, as it will establish an example for the future that evil people will be punished by law, however high their power.

The lawsuit in the US is still going on. Jiang and his associates are exerting diplomatic pressure on the US. Regarding this, Mr. Wang said, "Actually, this lawsuit is not only taking place in the court of law. Everyone has a balance in his mind. Chinese people are rebuking Jiang everywhere. In the media, in people's minds, in daily discussions, people are talking about this. The trial in people's minds has started." Bringing Jiang to justice is just a matter of time.

In the whole world, bringing Jiang to an international court is a reflection of righteous power in people's minds, morality and justice. When passers-by were asked about the persecution, they said the persecution would definitely come to an end. Falun Gong practitioners' enduring efforts and peaceful, rational actions have made people see the hope for justice. No one is above the law. The next generation will be able to speak freely and be good people following Truthfulness, Benevolence and Forbearance.