Several Bay area practitioners who came from Hong Kong held interviews with reporters from Chinese TV Channel 26, and two Chinese newspapers, World Daily and Jinshan Times. The practitioners played videotapes and displayed photos that clearly showed that Hong Kong and Swiss practitioners had neither "obstructed the street" nor "assaulted the police officers." Conversely, the pictures revealed how Hong Kong police officers rudely treated the peacefully appealing practitioners. Moreover, the Hong Kong police forcibly arrested Falun Gong practitioners without presenting arrest warrants, which reminded us that this was an extension of the Jiang regime's political persecution of Falun Gong to Hong Kong and other overseas countries. Without Jiang's persecution of Falun Gong, there would be no need for peaceful appeals by Falun Gong. Bay area practitioners reiterated their appeals to Hong Kong Judiciary departments to uphold justice and treat Hong Kong and Swiss practitioners who persisted in speaking out for "Truthfulness-Compassion-Forbearance" fairly. In their speeches, several practitioners expressed their doubts about Hong Kong's policy of "one country, two systems" and "remaining unchanged for 50 years." They also expressed their concern for the future of Hong Kong and its people. 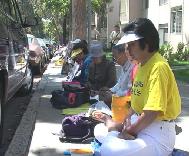 “People Know Right from Wrong In Their Hearts”