(Clearwisdom.net) My name is Xingying Liu. On June 29, when my husband and I landed at Hong Kong airport at 3:10 pm and went through customs inspection, an immigration officer immediately came up to us and rushed us into a small inquiry room for no reason. After we repeatedly asked why we were taken to this room, he told us that we could not be admitted to Hong Kong even for transition to another airplane. He said that he did not need to give us a reason. My husband was finally allowed to go. I was detained for 21 hours. In the course of 21 hours, I witnessed many unbelievable incidents of brutality. 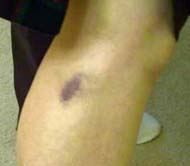 A bruise on my leg from the brutality of the Hong Kong police.

When I was taken into the inquiry room, I heard a tall thin man with small eyes and glasses (possibly the head of the police) was saying, "Got them all. No one escaped." Apparently, he was using a black list. About an hour later, a female officer told the tall thin man that some names were not exactly the same. The man said that no one was allowed to pass customs even if the name had only one character the same as the name on the blacklist. Thus, many people were denied admission. Some tour groups made up of several dozen tourists were refused entrance into Hong Kong. Many people were complaining. Some tourists from Taiwan complained that they would let the travel agency know that they would no longer visit Hong Kong and that this behavior was simply unacceptable. I asked the immigration officer why I was not allowed to enter Hong Kong. I have been to Hong Kong many times in the past. I have been a lawful visitor and have never done anything wrong in Hong Kong. Moreover, my relatives live in Hong Kong. I asked them if I was not allowed to enter Hong Kong because I am a Falun Gong practitioner or because Jiang was going to visit Hong Kong. No one answered my questions. All they told me was that they were doing what they were ordered to do from higher-ranking officials

The Hong Kong police were very stern in forcing the tourists to return to their country of origin. About 20 officers carried the tourists wrapped in canvas tarps to the airplane. Many children were scared and crying.

It was shocking to see how two female Japanese Falun Gong practitioners were treated. The two Japanese practitioners asked to talk to a lawyer before they were returned to Japan. Hong Kong police agreed to this request but then changed their mind quickly. Without asking two practitioners, the police tossed away their cassette players. Several dozen police then aggressively pushed the Japanese practitioners into an airplane. Their behavior was far from the conduct of police in a civilized society. An immigration officer with a white smock kicked one of the practitioners in her stomach. When I questioned them why they were beating people, they said that they would not beat people. They even asked me not to tell. When I persistently pointed out the officer in the white smock, he was asked to leave. I did not see him again until I left. The Japanese practitioner who had been beaten by the police was brought back again, since she had missed her airplane. She told me that she felt uncomfortable because certain acupuncture points on the back of her head were beaten. Her hands were bruised, her hair was messed up and her luggage was broken. She also told me that she felt bad and wondered why the Hong Kong police were so rude. When Hong Kong was returned to China, China had promised to adhere to the policy of "one country, two systems" and would leave it unchanged for 50 years. How come it had deteriorated so much after only five years? She had been in Hong Kong many times before. Was it because of Jiang's visit to Hong Kong that the police mistreated her?

A dozen Hong Kong police also mistreated a female Falun Gong practitioner from Singapore. I asked them to stop their brutal treatment of her. Two officers pushed me away and shouted at me to keep silent. They pushed me so hard that my left hand and two feet were bruised and I had to see a doctor when I returned to my country. During my detention, I only was given one meal. It made me disgusted that people would follow me around even when I went to the bathroom. They took away my dignity. I was treated worse than a prisoner and I had completely lost my freedom.