WHEREAS, Falun Dafa is a body/mind cultivation system based on the principle of Truthfulness-Compassion-Forbearance, the supreme characteristic of the

WHEREAS, all Falun Dafa activities, including classes and exercise teaching, are offered by volunteers and are open to the public free of charge; and

WHEREAS, since its public introduction in May, 1992, by Mr. Li Hongzhi, Falun Dafa has benefited over 100 million practitioners worldwide both physically

and spiritually, as well as our communities and the whole society, and its contribution has been widely recognized and honored around the world; and

WHEREAS, Falun Dafa transcends cultural and racial boundaries, bridges the gap between east and west, and convey the universal truth to the whole world; and

WHEREAS, the great compassion and forbearance demonstrated by Falun Dafa practitioners under the most severe environment has touched the hearts of numerous kindhearted people;

NOW, THEREFORE, I, GARY MONAHAN, Mayor of the City of Costa Mesa, do hereby proclaim December 4th through December 8th, 2000, as Falun Dafa

Week in the City of Costa Mesa, and do urge all citizens to join in the celebration.

Mayor of the City of Costa Mesa 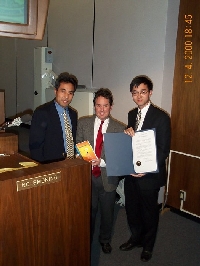 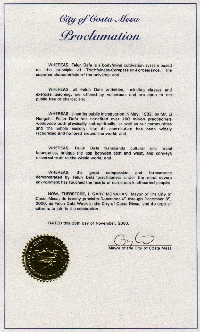