Home > Persecution > Accounts of Persecution
Woman Sentenced to Four Years, Her Sister Faces Prosecution, All for Their Shared Faith
Sept. 9, 2022 | By a Minghui correspondent in Fujian Province, China

(Minghui.org) Two sisters in Fuzhou City, Fujian Province in their 60s were targeted for exposing the Chinese Communist Party’s persecution of their faith, Falun Gong. One of them has been sentenced to four years and the other is facing prosecution after she was recently arrested following two years of displacement to hide from the police.

Ms. Li Yaping and Ms. Li Weiping went out to distribute informational materials about Falun Gong in a neighborhood on the evening of March 27, 2020. One family, whose doorbell camera recorded them in the act, reported them to the police, who arrested them three days later. As the local detention center refused to accept them during the pandemic, the police extorted 4,000 yuan from them and released them on bail.

After that, the police and local residential committee staff members kept coming to harass the sisters. On July 13, 2021, Ms. Li Weiping’s husband received a call from Yuefeng Police Station, ordering the sisters to sign their case document at the police station. Since they didn’t go, the police went to Ms. Li Weiping’s home to arrest her on July 14. Ms. Li Yaping escaped the arrest as she wasn’t home when the police came. She's been forced to live away from home ever since to hide from the police.

After 14 days at the Minqing County Lockup, Ms. Li Weiping was taken to the Fuzhou City No.2 Detention Center. When her family called the police on August 21, they were told that the Jin’an District Procuratorate had just approved her arrest. After two years of detention, Ms. Li was tried by the Mawei District Court and later sentenced to four years. She has filed an appeal with Fuzhou City Intermediate Court.

Ms. Li Yaping, on the other hand, was put on the wanted list by the police. The authorities also suspended her pension in retaliation. While distributing Falun Gong materials in Yongtai County near Fuzhou City on August 17, 2022, she was arrested by the local police, who handed her over to the Yuefeng Police Station in Fuzhou. She is now facing prosecution.

Past Persecution of Ms. Li Yaping

Ms. Li Yaping, 66, took up Falun Gong in 1997. Only a week later, the headache and tracheitis that had plagued her for years disappeared. She also changed her bad temper and became more peaceful.

After the communist regime ordered the persecution in 1999, Ms. Li went to Beijing three times to appeal for the right to practice Falun Gong and was arrested each time. She was given two years at the Qingyunpu Forced Labor Camp in Nanchang City after her third arrest. She was subjected to intensive brainwashing and forced to do unpaid labor during her term.

For reading a Falun Gong magazine while riding the train in January 2002, she was arrested and detained for seven days.

A few months later, Ms. Li was arrested again after being reported for putting up stickers that said “Falun Dafa is good.” She was sentenced to four years a few months later at the Nanchang Women’s Prison. The guards constantly beat and verbally abused her. She was also forced to stand for long hours and held in solitary confinement. For most of her term, she was forced to work for more than ten hours without pay each day. She wouldn’t be allowed to sleep if she didn’t finish the quota for the day.

Because of her doing Falun Gong exercises, the guards broke her left arm and handcuffed her hands behind her back. The broken bone penetrated her flesh. Her arm became severely swollen the next day. Only then, did the guard take her to the hospital for treatment. 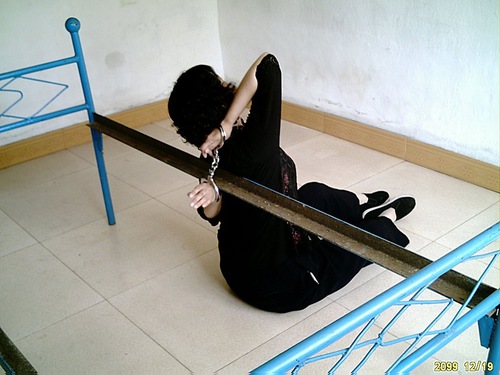 After Ms. Li later retired from the railroad station in Yingtan City, Jiangxi Province, she moved to Fuzhou with her husband. Due to her continued effort to raise awareness about the persecution, she was arrested three more times on July 22, 2011, 2012, and February 15, 2015, for distributing Falun Gong materials. She was detained for 15 days after the 2011 arrest.

Following her arrest in 2015, she was held at the Fuzhou City No.2 Detention Center. The Jin’an District Procuratorate approved her arrest on March 23. After two hearings on August 20 and September 8, 2015, by the Jin’an District Court, she was sentenced to 4.5 years at Fujian Province Women’s Prison. She appealed with the Fuzhou City Intermediate Court, but it ruled to uphold her original verdict.

Past Persecution of Ms. Li Weiping

Ms. Li Weiping, 64, took up Falun Gong in late 1998 at the recommendation of her sister. She also became more considerate and was no longer a competitive and demanding lady.

Since the onset of the persecution, the authorities have prevented her from traveling out of town, especially around major holidays, political events, and anniversaries related to Falun Gong. The police constantly harassed her when she didn’t renounce her faith.

“At Mid-Autumn Festival, Supporters of Falun Dafa Grateful for the Blessings Dafa Brings”

“My Sister’s Family Is Blessed for Their Kindness”