(Minghui.org) Today's news from China includes incidents of persecution that took place in 12 cities or counties in 7 provinces, where at least 25 practitioners were recently persecuted for their belief. 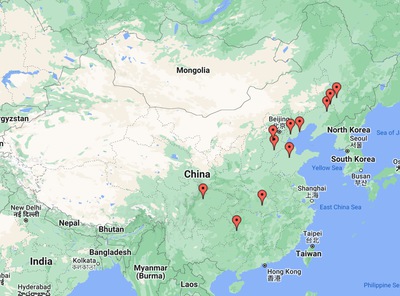 Ms. Wang Qingfang was reported to the police for talking about Falun Gong and was arrested on February 18, 2022. Her home was ransacked. She was released on bail pending trial on July 26, 2022.

Ms. Zhang Yan was arrested at the restaurant where she worked by officers from the Sima Road Police Station in Tiedong District on July 20, 2022. She is currently detained in the Siping City Detention Center.

Five plainclothes officers from the Changjiu Road Police Station went to Ms. Zang Hongyan’s home at 6:10 a.m. on September 16, 2022. They arrested Ms. Zang and her non-practitioner family member. They confiscated her Falun Gong books, a photo of Falun Gong’s founder, some booklets, a media player, a computer, USB drives, etc. Ms. Zang was placed under detention. Her family member was released that afternoon.

Ms. Ding Weimei, 68, was reported to the police when she hung a poster in the village. She was arrested by twelve officers from the Wanxi Township Police Station on July 30, 2022. Her son Mr. Yang Jiangyun was also arrested when he tried to protect her. The police went to ransack Mr. Yang’s home. Her husband Mr. Yang Chunli, a non-practitioner, decided to accompany his wife.

Two officers from the Xiantai Police Station in Gaoxin District went to harass Ms. Liu Lanying and Ms. Yang Suling in Yangzhuang Village on September 14, 2022. They confiscated some desk calendars, wall posters, and other personal belongings. They threatened Ms. Yang’s grandchildren and said that their ability to go to school or join the military would be jeopardized.

Ms. Shi Jingrong, Ms. Zhou Yan, and Bangjun, were arrested by officers from the Fucheng District Police Department on September 8, 2022.

Police officers including Wang Shengfa from the Matou Police Station went to harass Mr. Fan Zhanfeng and Ms. Zhao Jinfen on the morning of September 12, 2022. The practitioners were warned not to go out and were photographed.

Ms. Zhang Cuiying from Xinzhai Town of Laoting County was arrested by police on the morning of September 13, 2022.

Zhou Xiangyang (gender unknown) has been watched and followed by police since September 10, 2022.

Ms. Zeng Qinling and Ms. Tang Xueying were each sentenced to four years and fined 10,000 yuan around May 2022. When their families went to the detention center on September 16, 2022, to deposit money for them, they were told that the practitioners were taken to the Hunan Province Women's Prison on September 8.

Mr. Zhang Guanghe was sentenced to 2.5 years on August 30, 2022, by the Pinggu District Court. The Pinggu District Detention Center refused to admit him due to his high blood pressure. He was released that evening.

When Mr. Zhang's wife came home from work at 5 p.m. on September 11, 2022, she saw three people wandering around the apartment building, claiming to be inspecting the electrical wiring. But as soon as she opened the door, they followed her into her home and arrested Mr. Zhang. It's not clear where he is detained.