(Minghui.org) Today’s news from China includes incidents of persecution that took place in 13 cities or counties in 7 provinces, where at least 22 practitioners were recently persecuted for their belief. 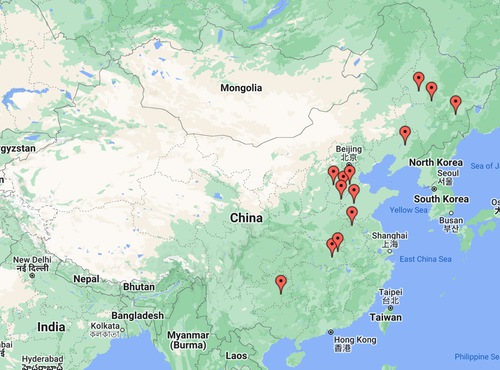 Ms. Chen Guolan and Ms. Wu Dongxian were arrested and held in the Kaili City Case Center on September 15, 2022. They were released the next day.

Mr. Guo Libin was arrested on June 10, 2021, by officers from the Hailin City Domestic Security Office. He was sentenced to six and a half years in prison and fined 5,000 yuan by the Hailin City Court. The Mudanjiang Intermediate Court dismissed Mr. Guo’s appeal.

Mr. Guo has been held in the Mudanjiang Prison intense Training Division for nearly two months. His family was not allowed to visit him or give him money or clothing.

Ms. Zhao Xinyun and Ms. Wei were arrested at their homes by officers from the Lieshan Police Department on the afternoon of December 1, 2021.

They were each sentenced to one year and nine months in prison by the Lieshan District Court.

Mr. Fu Shengqiang, in Huangpi District, was recently taken to a brainwashing center.

Ms. Jiang Jianhua was sentenced to five years in prison on October 8, 2017. She has been held in the Shenyang City Women’s No. 2 Prison. Her term expires on October 7, 2022.

Clerks from the Tiemenxiang Community Office and the Songjiawan community office harassed Ms. Cao’s brother, Mr. Cao Shilin, and her sister, Ms. Cao Taozhi, from September 5 to 14, 2022. The clerks pressured them to sign guarantee statements renouncing Falun Gong, which they refused.

Zhao Yunfei’s (gender unknown) home was ransacked by Liu Jianxin and other police officers on September 16, 2022. The police confiscated his Falun Gong books and photo of Falun Gong’s founder.

The case against Zhao Yunfei was reopened.

The case against Ms. Lu Shuzhen, who was arrested around the same time, was withdrawn from the Procuratorate on September 19, 2022.

Officers from the local police station broke into elderly Ms. Zhang Xiuyun’s home on September 18, 2022. They forcibly photographed her and confiscated her Falun Gong books.

Ms. Li Dongmei of Xiaozhang Village was harassed by the police, who were carrying video recorders, on September 17, 2022. They asked her if she still practiced Falun Gong and told her to give them her cell phone number.

A group of officers from the Wanshan Police Station broke into Mr. Lyu Yueguang’s home in the Nanwangduan Village on September 18, 2022.

They locked the door and did not allow Mr. Lyu’s wife to go out. They beat her when she tried to escape. They then forcibly took a blood sample from Mr. Lyu.

The police also broke into Ms. Zhang Guihua’s home in the same village and forcibly collected her blood sample.

Officers from the Jiefang Police Station harassed Yin Jian on September 20, 2022. The police video recorded Yin Jian and threatened to report to him or her to the higher authorities if Yin Jian continued to practice Falun Gong.

Ms. Liu Gangli was taken to Liaoning Province No. 2 Women’s Prison on August 16, 2022. She was incarcerated in the second ward.

Her family was denied the right to visit or phone her.

Four officers dragged Ms. Dai out of the house and attempted to pull her into a police car. Her 80-year-old mother-in-law strongly resisted, so the police left.

The police went to Ms. Dai’s house again on September 16. They asked her to go to the police station to verify some issues, which she refused. After an hour long stalemate, the police left.

Four officers went to Ms. Dai’s house again the following day, but she was not home.

Hang Shujun, from the Gaocheng district, was arrested by officers from the Economic and Technological Development Zone Police Station on September 20, 2022. Further information is pending.

Ms. Sun Jinhui was arrested by officers from the Taishan District Police Department Division on December 10, 2021, when distributing calendars printed with information about Falun Gong.

“Study the Fa Well, Hurry Up and Save Sentient Beings”

Latest Podcast
Podcast (Cultivation): “Cooperate as One Body and Advance Diligently Together”
- Sep 29, 2022