(Minghui.org) Today's news from China includes incidents of persecution that took place in 16 cities or counties in 8 provinces, where at least 32 practitioners were recently persecuted for their belief. 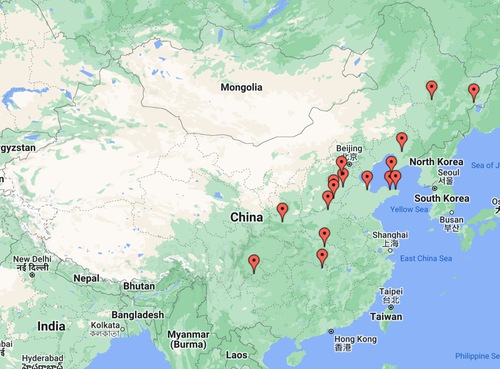 Mr. Zhao Changyu lives in Kangma Village, Zaoqiang Town, Zaoqiang County. He was arrested in mid-June 2022 when he took a nucleic acid test in a hospital. It was recently learned that Mr. Zhao Changyu was sentenced to six years in prison by the Jizhou City Court.

Ms. Deng Ling was placed under official arrest on September 1, 2022. She is being detained in the Yibin City Detention Center.

Gao Baoyan and Zhang Fangge were reported to police and were arrested when they distributed information about Falun Gong in Dazhuang Town on August 26, 2022. Their homes were ransacked.

Ms. Zhang Suqin was reported to police and was arrested when she talked about Falun Gong in Beiyunmen Township on June 14, 2022. She was released on bail pending trial and was placed under residential surveillance. Her case has been submitted to the procuratorate.

Wang Dianhua (gender unknown) was arrested at home by officers from the Zhifu District Police Department and the Lijiaoqiao Police Station on September 6, 2022. Wang is currently detained in the Zhifu District Domestic Security Division.

People from three neighborhood committees in Qianliang Town of Junshan District and the Qianliang Town Government went to harass practitioners on September 2, 2022. Mr. Chen Qingshan and his wife Ms. Wang Ling were harassed at home. They had their photos taken and they had to provide their residential ID numbers. Ms. Zhao Qunlan was also harassed at home. Mr. Wang Youjun received a harassing phone call.

Ms. Wang Zhenju lives in Zhangwei Village, Julu County. Two officers showed up at her door at noon on August 28, 2022 and wanted to search her home. They claimed that she had a computer, printer and truth clarifying materials.

Ms. Li Pingxia and Ms. Wang Suying live in Beitian Village, Beitian Township, Dingxing County. Officers including Wang Yong from the Beitian Township Police Station went to the village in three police cars on September 5, 2022. They ransacked the two practitioners’ homes and confiscated their Falun Gong books and photos of Falun Gong’s founder. The practitioners were taken to the police station. Ms. Li’s son was blackmailed and had to pay them 3,000 yuan. The practitioners were released around 6 p.m.

Ms. Chi Yaoling lives in the Jiangong Village, Shuangcheng District. Village officials went to her home on August 30, 2022. When they learned that Ms. Chi was not at home, they called her daughter Ms. He Lirong and pressured her to sign the three statements. When she refused, they threatened her with impacting her child’s future.

Xin Tianying colluded with the Suizhou City Politic and Legal Affairs Committee, and attempted to take photos of Ms. Qiu Xinfang on the street. Xin dropped his cell phone when Ms. Qiu tried to stop him from taking a photo. Xin blackmailed her for 1,000 yuan.

Xin Tianying and other gang members intercepted Ms. Cheng Fangqin on the street when Ms. Cheng was on the way back home on August 24, 2022. They scolded her and called the police. The police ransacked Ms. Qin’s home and confiscated her Falun Gong books and around 4,000 yuan in cash.

Xin Tianying and other gang members called the police after finding out Xie Wenqing (gender unknown) talking about Falun Gong in a vegetable market on the morning of August 29, 2022. Xie was arrested, but was released the next day due to the medical examination result.

Ms. Shi Yanying and Mr. Bai Xuesong had a third hearing in the Lishan Court on August 19, 2022. The hearing was halted due to new evidence from the prosecutor and lack of time for the defense lawyer to prepare. The fourth hearing is scheduled for the morning of September 16, 2022.

Twelve police officers ransacked Ms. Xu’s home. They arrested Ms. Xu’s husband because he refused to cooperate. Ms. Xu was detained in a metal cage that night and was taken to the No. 2 Detention House next morning. She was placed under 15-day detention and was released on August 29, 2022.

Three officers from the Beitaitou Township Police Station, including Yang Yongguang, head of the police station, went to Ms. Huang Guiqin’s home in the Xiaowangzhuang Village on August 12, 2022. Ms. Huang’s son did not let them in at first. But they insisted and he eventually let them in to take some photos. Ms. Huang left her hometown years ago.

Three officers from the Weicheng Town Police Station went to Guo Mengbao’s home in the Beiluoying Village on the afternoon of August 23, 2022. They took some photos.

Village officials in the Beiluoying Village went to Ms. Tian Meiling’s home on August 26, 2022. No one was at home. They tore off the couplet that was on the door.

Three people including Jiang Xianjun, deputy of Bokou Township, and Lian Xuehai who is a Cuiyechong Village official, went to Ms. Geng Shemei’s home on the afternoon of July 16, 2022. They photographed around and confiscated a photo of Falun Gong’s founder.

Ms. Zhou Guangyan lives in 857 Farm, Beidaying Community. Some community members, including the head of the community, went to her home on September 4, 2022. They took Ms. Zhou to the community office and pressured her to sign the three statements, which she refused. Two police officers told Ms. Zhou that she must report to the Lianzhu Police Station once a month on the 8th. Ms. Zhou is not allowed to travel outside of the town for the following three months because of the 20th National Congress of the Communist Party of China. Ms. Zhou was not allowed to leave until 7 p.m.

Ms. Zou Huajun was reported to police for talking about Falun Gong and was arrested by officers from the Jinhaitan Police Station on the afternoon of August 29, 2022. Her husband was arrested as well. Their home was ransacked. The police confiscated their Falun Gong books, USB drives, media player, etc. Ms. Zou was taken to the police station for interrogation and was released at 5 p.m.