(Minghui.org) Today's news from China includes incidents of persecution that took place in 10 cities or counties in 5 provinces, where at least 23 practitioners were recently persecuted for their belief. 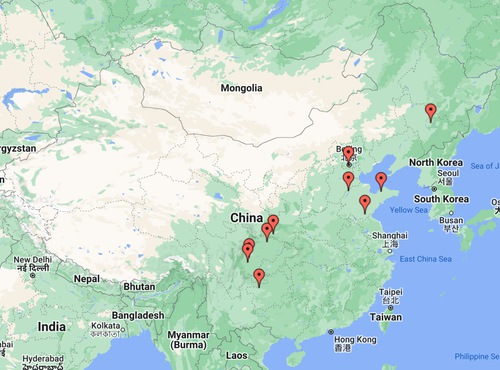 Ms. Ma Fang and a practitioner named Sun were arrested in a residential community near the Jiangwan Bridge on the afternoon of August 27, 2022. Further information is pending.

Ten practitioners from Duozhuang Town were arrested by officers from the Duozhuang Town Police Station on the morning of August 26, 2022, when they were reading the Falun Gong teachings at Mr. Wei Jiuxiang’s home.

Officers from the Ande Street Police Station in the Lingcheng District kept going to Ms. Gu Wenhua’s home in Xifeng Village to harass her. They forced her to have her photograph taken with them.

On the afternoon of August 26, 2022, the wife of the Party secretary of Xifeng Village went to Ms. Gu’s home to transform her.

Seven people from the Xindu District Police Department, the Xindu District Justice Department, and the Dafeng Town Administration Office broke into Ye Jichun’s home in Dafeng Town, Xindu District, around 3 p.m. on August 14, 2022. They took out a prepared commitment letter and told Ye to sign, which Ye refused. Immediately, two people grabbed Ye’s hands and forced Ye to sign the letter. They confiscated photos of the founder of Falun Gong and two copies of Minghui Weekly.

Officers from the Liuqiao Police Station in Weining County broke into Mr. Dai Yongmao’s home, who is in his 80s, and ransacked the place on August 22, 2022. They confiscated three Falun Gong books and printed materials. Mr. Dai was taken to the police station and released around 6 p.m. that day. In the police station, the officers questioned Mr. Dai and took notes. They pressured him to sign paperwork, made him give a urine sample, and photographed him.

Ms. Yao Shuping, 65, a retired senior library staff member of Beijing Jiaotong University, was arrested at home on July 29, 2022. The police ransacked her home and confiscated her Falun Gong books. Details about her situation are not yet available.

Ms. Wang Weidong, in her 70s, was arrested and taken to the Wenmiao Police Station by two officers when she talked to people about Falun Gong at the Wankelong supermarket on the afternoon on June 26, 2021. The officers ransacked her home and confiscated over 40 Falun Gong books and photos of the founder of Falun Gong. They told Ms. Wang to sign the receipt for the confiscated books. Ms. Wang was released around 10 p.m. that night.

Residential officer Du Yongming from the Zhanqian Police Station and others broke into Ms. Wang’s home and took a Falun Gong book at noon on July 15, 2022. They took Ms. Wang to the police station and pressured her to sign paperwork. Ms. Wang wrote “refuse to sign” on the sheet.

Ms. Chen Mingxiu, Ms. Yan Qunying, and Ms. Gan Bin, all from the Dongpo District, were reported to the police while they talked to people about Falun Gong in Xiuwen Town on the morning of August 24, 2022. They were arrested and taken to the Xiuwen Police Station. That afternoon they were then taken to the Domestic Security Division of the Dongpo District Police Department. Ms. Gan was released that evening because of her high blood pressure. Ms. Chen was detained for 10 days. Ms. Yan was detained for 12 days.

“Some Thoughts on Most Dafa Disciples’ Cultivation State”