(Minghui.org) Today's news from China includes incidents of persecution that took place in 13 cities or counties in 8 provinces, where at least 27 practitioners were recently persecuted for their belief. 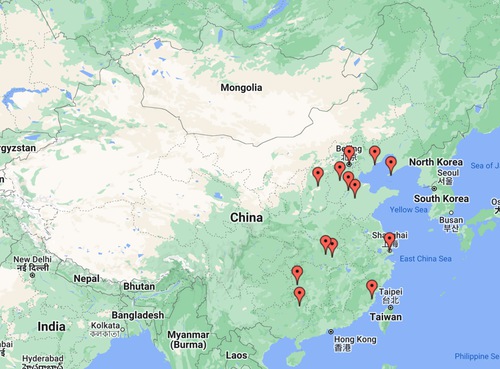 Tang Chao (gender unknown) of Lingchuan County was sentenced to three years and six months in prison and was fined 5,000 yuan on September 1, 2022.

Officers from the Tielu Police Station ransacked Ms. Tang Qingying’s home, and seized all of her Falun Gong books. They arrested her and Ms. Yang Xiaohui and took them to the police station. Ms. Tang was sick and was released on bail. Ms. Yang’s situation is unknown.

Xiao Guiying, Yin Qiuyang, Ms. Wu Fangming, Chen (first name unknown), and Huang (first name unknown) were arrested by officers from other police stations. Their homes were ransacked. Ms. Wu was released as her court hearing would be held soon. Yin and Chen were released.

Mr. Shen Guosheng’s attorney received a notification from the Yingze District Court. Her second virtual hearing is scheduled for September 8, 2022, at 2:30 p.m.

Yang Chunqi (gender unknown) of Heidouyu Village, Pinggu District distributed Falun Gong flyers on August 24, 2022. Someone reported her. Pinggu police arrested her around 4:00 p.m. She was released around 10:00 p.m.

Ms. Li Shufang was arrested by officers from the Tongzhou District and Yanjiao Town after 8:00 p.m. on September 1, 2022, when she went out to go shopping from her apartment in Yanjiao. It was said that police tracked her for some time. She was taken back to Tongzhou that night.

Ms. Deng Limin was harassed at home by Yaohua Community clerks for three consecutive days. They ordered her to sign three statements printed by the Anguo City Political and Legal Affairs Committee and threatened her with the loss of her family members’ jobs. They said the signed statements would be turned in to the committee. They made records of her children’s pictures and contact information. Her family was forced to sign the statements for her.

Ms. Wang Haiyan was released on August 20, 2021, after she was imprisoned for more than four years. She lost her ability to speak and her memory is now impaired as a result of the persecution and poison injections that she was subjected to while she was imprisoned.

In early February 2022, she no longer recognized her parents. She beat and scolded others. She was admitted to a psychiatric hospital in April and was discharged at the end of June.

Ms. Cui Ying of the Gaoxin District talked to people about the persecution of Falun Gong in an evening market on June 11, 2022. Someone reported her. Police identified her from the surveillance system. She was arrested by two officers from the Zhiyuan Police Station. Her home was ransacked that night. Her Falun Gong books and other items were confiscated. She was released after 1:00 a.m. on June 12. The officers ordered her sign a nine days of criminal detention notification. She refused.

She received a subpoena from the Shunhualu Police Station on August 12. It claimed she was suspected of, “organizing, instigating, coercing, luring, inciting, or engaging in (slanderous term deleted), or religious activities.”

Ms. Liu Zhimei, 66, of Daxinzhuang, put flyers on cars in May 2022. Officers noticed this through the surveillance system. They followed her to her home, ransacked the place, and arrested her. They threatened her and tried to force her to sign statements. Her village committee reported her to the Jinan City 610 Office. Afterwards, 610 Office agents repeatedly harassed her at home and tried to coerce her to renounce Falun Gong. She and her family are traumatized.

Xiong Xiaode was arrested at home by officers from the Chengzhong Police Station at the end of August 2022. The officers seized four Falun Gong books and took Xiong to the police station. Xiong was released at 9:00 p.m.

Ms. Li Sumei of Zhuanghe City was arrested by officers from the Xingda Police Station at 2:00 p.m. on August 11, 2022, for talking to people about the persecution of Falun Gong. She was held in the police station for one day before she was released.

Ms. Zhang Xi has been indicted by the procuratorate. Ms. Shan Xiufang was arrested by officers from the Development Zone Police Department on July 14, 2022. Her home was ransacked. She is being held in the Dezhou City Detention Center.

Ms. Jiang Linyin has been held in the Baoshan Detention Center since February 3, 2021. The Baoshan Court scheduled her trial for September 8, at 2:30 p.m.

Ms. Chen Guohua and Ms. Jiang Shuzhen, both around 60, were arrested by officers from the Zhonghualu Police Station on the morning of September 1, 2022, for talking to people about the persecution of Falun Gong.

“My Family Members Changed When I Cultivated Well”