(Minghui.org) Today's news from China includes incidents of persecution that took place in 14 cities or counties in 7 provinces, where at least 32 practitioners were recently persecuted for their belief. 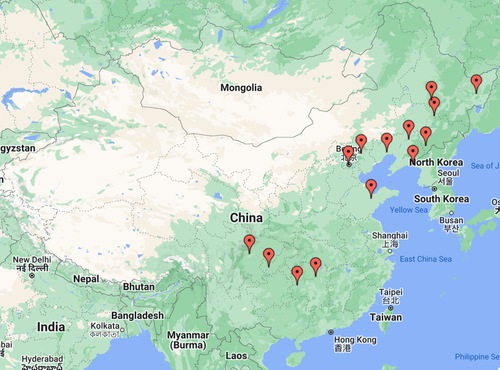 Mr. Zhang Ming was arrested by officers from the Zhanqian Police Station on August 10, 2022. His home was ransacked. The police confiscated his Falun Gong books, the photo of Falun Gong’s founder, and other personal belongings. Mr. Zhang was detained in the Dandong City Detention Center. He was placed under official arrest on August 22, 2022. His case was submitted to the Zhen’an District Procuratorate.

Twelve officers from the Tuanjie Police Station in Hecheng District went to the apartment where Ms. Liu Yu’e and Ms. Yang Guihong lived at 10 a.m. on August 29, 2022. Four practitioners, Ms. Yang Guihong, Ms. Qiu, Ms. Yi and Ms. Luo, were there and were arrested. The police ransacked the place and confiscated all of their Falun Gong books, four photos of Falun Gong’s founder, several USB drives, a computer, a video player, a box of sandalwood incense, truth-clarifying materials, a few thousand yuan in cash, and other items. The four practitioners were taken to the Tuanjie Police Station and were released in the afternoon. Except for the three photos of Falun Gong’s founder, the other confiscated items were not returned.

Ms. Sun Xianting was tracked by officers from the Erdaojiang Police Station while distributing truth-clarifying materials. The police arrested her at her home on the evening of August 25, 2022. They confiscated a few thousand yuan in paper bills imprinted with Falun Gong information and other personal belongings. Ms. Sun is detained in the Liuhe County Detention Center.

Ms. He Xiaodan, Ms. Wang Ying and Ms. Gong Lina, were arrested on May 12, 2022. They have been transferred to the Jinzhou City Detention Center.

Ms. Yu Dehui from Rongchang District was arrested at her rented apartment by officers from the Jinfeng Police Station in Gaoxin District at 10 a.m. on August 2, 2022. Ms. Yu was detained in the Shapingba Detention Center until August 7, 2022. She stayed in the designated Yidu Hotel in Bai City for quarantine and was watched by two security guards 24 hours a day. Ms. Yu returned home on August 24, 2022 and was placed under residential surveillance.

Ms. Meng was tricked and went to the local neighborhood committee on August 11, 2022. Huang Xiongying, secretary of the Anxiangli Community Party Committee in the Chaoyang District, the secretary of the neighborhood committee, and the head of the local police station, were there and pressured Ms. Meng to sign the four statements. They threatened to arrest her at the end of the month if she did not cooperate. Ms. Meng left her home to avoid further persecution. Her family members, including her father in his 90s, have been harassed many times.

Ms. Chen Qinglan was arrested at around 7 a.m. on August 26, 2022 on the way back home after buying breakfast. She has been detained.

Some people including Xiao Yijun and Duan Caiyun came to Ms. Chen’s home at 9 a.m. on August 30, 2022. When she refused to cooperate, they called the police. Ms. Chen was arrested and taken away by officers from the Fanjiang Road Police Station.

Mr. Zhu Mingdi and Ms. Cai Xiuying from the Xiangfang District have been arrested and detained for more than a month.

Ms. Liu Ruilan, 50, was harassed at home by some people including Li Changshan, head of the Fengning County Domestic Security Division, around August 30, 2022. They videotaped and photographed around.

Ms. Jiang Dejun from Hechuan District was harassed at home by two officers, Zhu Tiankui and Zhang Yue, at 10 a.m. on August 15, 2022. They told Ms. Jiang not to meet with other practitioners. They walked around the place and confiscated two MP3 players and a USB drive that were laying on a table.

Five officers from the Wanjinshan Township went to Ms. Liu Chunxia’s home on the afternoon of August 29, 2022. They photographed Ms. Liu and asked for her phone number. They also asked whether she still practiced Falun Gong.

Ling Wei, director of the town general office, and five police officers went to Zhang Hua’s home around May 23, 2022. They photographed the interior of Zhang’s home.

Six people, including Ling Wei and Huang Wei, went to harass Zhang on July 23, 2022. They photographed the interior of Zhang’s home.

Five people, including the new director of the town politic and legal affairs committee, went to harass Zhang at Zhang’s home on August 9, 2022. They photographed the interior of Zhang’s home.

Five officers, including Ling Wei, went to harass Zhang on August 25, 2022 and photographed the interior of Zhang’s home.