(Minghui.org) Today's news from China includes incidents of persecution that took place in 10 cities or counties in 8 provinces, where at least 10 practitioners were recently persecuted for their belief. 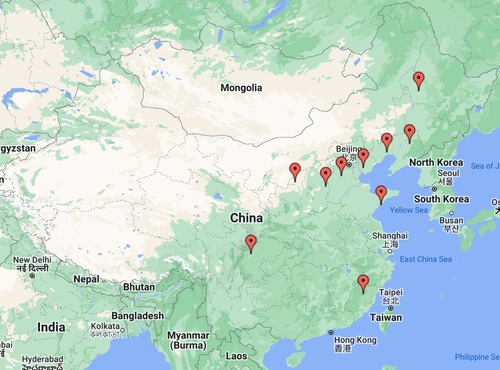 Mr. Wang Zhongsheng, 75, from Xinbin County was sentenced to four years in prison. He is being held in the No. 3 Ward in Dongling Prison. He was seriously abused and his life was in imminent danger. He is currently hospitalized in a prison hospital.

According to an insider, prison guards forced Mr. Wang to sit on a small stool and did not allow him to move. His hips developed sores that became infected, and the condition kept worsening.

Ms. Li Dongju was officially placed under arrest by the procuratorate in recent days.

Ms. Wei’s family called the police station, and the director said that Ms. Wei was taken to the Songshan Police Station in the Jinzhou Development Zone for custody, pending the results of another physical examination on August 22.

Ms. Hu Jinfeng from Xilijiazhuang Village, Yaocun Township, Dingxing County, was arrested by officers from the Gaoliying Police Station in Shunyi District on July 27, 2022. She is being held in the Shunyi District Detention Center. Her family did not learn about her detention until recently.

Pucheng County police officers suddenly broke into Ms. Bu Lihua’s home in Shibei Town and took her to the county police department on June 23, 2022. She failed the medical examination at the hospital, and returned home. The officials ordered her to stay either in her hometown, Shibei Town, or the Chengguan area in Pucheng County, and not go anywhere.

In November 1999, Ms. Bu went to Beijing to speak up for Falun Gong and was detained for 14 days. In April 2000, she went to Beijing again to speak up for Falun Gong and was sentenced to four years in prison and held in Lianjiang Women’s Prison in Fuzhou City. In February 2005, Ms. Bu was arrested while clarifying the truth in Shibei Town. She was held in the Fuzhou Women’s Labor Camp for two years. In June 2011, she was arrested for clarifying the truth in the Chengguan area, and she was once again taken to the labor camp for one year.

One evening at the end of 2021 around 10 p.m. Ms. Bu and other practitioners were doing the exercises at a fellow practitioner’s home. They were arrested by officers from the Pucheng County Domestic Security Division and the Chengguan Police Department. Two days later, Ms. Bu was taken to another place for detention. The detention center refused to accept her due to her high blood pressure and blood sugar. She returned home the same day.

Mr. Chen Lian was videotaped by four members of the Guanghan Patrol Unit when he talked to people about Falun Gong in Guanghan Street around 9 a.m. on July 26, 2022. He was arrested and taken to the Chengbei Police Station. The officers ransacked his home and confiscated photos of the founder of Falun Gong, Zhuan Falun, other Falun Gong books, calendars, and weekly Falun Gong publications. Mr. Chen returned home the same day.

Chen Guifang from the mining area in Yangquan City was arrested by officers from the Beilingpo Police Station a few days after Chen walked out of a brainwashing center. Chen was held in the Yu County Detention Center. Further information is pending.

Members of the Pingdu City 610 Office broke into the home of Ms. Liu Xuehua’s son on the morning of August 17, 2022. They pressured Ms. Liu to sign some paperwork. Ms. Liu refused. Then they tried to pressure her son to sign it, which he refused.

Chou Hongfeng was reported to the police for talking to people about Falun Gong. Chou was arrested and taken to the Qingnandao Police Station in the High-tech Zone on the afternoon of August 10, 2022. Chou was given 10 days of detention by the High-tech Zone Domestic Security Division. Chou’s home was ransacked. Chou has returned home safely.

Ms. Zhang Cuifang, in her 60s, was reported to the police while talking to people about Falun Gong on August 1, 2022. She was arrested by officers from the Yulin City Domestic Security Division.

“How a Single Mother Is Raising Her Daughter (Part 2)”