(Minghui.org) Today's news from China includes incidents of persecution that took place in 10 cities or counties in 8 provinces, where at least 20 practitioners were recently persecuted for their belief. 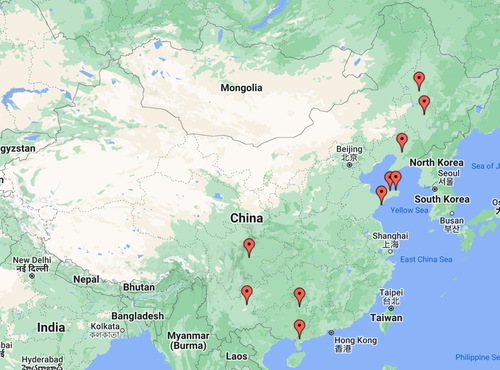 On August 18, Ms. Zhao’s family went to Lindian County Police Department’s Domestic Security Division to inquire about the situation. The answer was that after the procuratorate returned the case, they added additional materials. The procuratorate then registered the case and officially arrested Ms. Zhao. The Lindian County Police Department issued an arrest notice, and Ms. Zhao was held in the Daqing City No. 2 Detention Center.

Ms. Wang Yuan was arrested on the afternoon of January 24, 2022, for distributing Falun Gong materials. She was tried by the Lishan District Court on August 8, and was sentenced to one year in prison.

Tang Chao (gender unknown) from Lingchuan County was arrested at home on March 2, 2021, for distributing Falun Gong materials. A computer, a printer, two cell phones, and printer paper were confiscated. Tang was held in Lingchuan County Detention Center. After being officially placed under arrest by the Lingchuan County Procuratorate in April 2021, Tang went on a hunger strike and was released on bail.

Tang’s case was turned over to the Lipu County Procuratorate on October 20, 2021. Charges were brought up against Tang on December 31. On August 16, 2022, Tang was tried, and the verdict has not yet been announced.

Ms. Fu Chunhua, 69, and her daughter Ms. Jiang Jinggang from Zhifu District were arrested by plainclothes officers from the Baishi Road Police Station on the afternoon of July 16, 2022. Both practitioners were taken to the Shihuiyao Police Station and held there.

The officers took their keys and ransacked their home. All of their Falun Gong related items and house keys were confiscated. They then arrested Ms. Fu’s 71-year-old husband Mr. Jiang Qianguo when he stepped inside the home.

The three practitioners were interrogated at the Zhifu District Police Department. Then they underwent PCR testing. The officers also took their fingerprints and blood samples. During the process, Mr. Jiang was handcuffed and restrained in a metal chair inside an iron cage.

The following afternoon, the three practitioners were taken for medical examinations, and were then taken to the Muping Detention Center. Afterwards, Ms. Fu was transferred to Yantai City Detention Center, and Mr. Jiang was transferred to the Zhifu District Detention Center. Their daughter was not admitted by the detention center for physical reasons and was instead placed under 6 months of residential surveillance. The Zhifu Police Department has now turned their cases over to the procuratorate, pending its decision to issue official arrest warrants.

Ms. Dai Yuzhen from the Qilin District was sentenced to one year in prison. She appealed with the Qujing City Intermediate Court, which upheld the original verdict. Ms. Dai was about to be taken to Yunnan Province Women’s No. 2 Prison.

Ms. Qin Ruiying in Qilin District suffered a stroke and was paralyzed in bed. Practitioners made an appointment to visit her.

On August 12, 2022, the Jianning Police Station suddenly ransacked the homes of Ms. Yang Yufen, Ms. Zhan Shuying, Ms. Zhao Qunmei, and Ms. Qin Ruiying, who were at Ms. Qin’s home that day. The officers threatened them and pressured them to reveal where the Falun Gong materials came from, who instructed them to go to Ms. Qin’s home, and why they went there.

The officers were monitoring Ms. Yang. When the officers went to ransack Ms. Zhao’s home, she sternly stopped them.

Ms. Liu Cuilan from Wenquan Town was reported to the police while talking to a child at around 3 p.m. on August 18, 2022. She was arrested by officers from the Wenquan Town Police Station and released on the same day.

Lu Xinli (gender unknown) was reported to the police while distributing Falun Gong materials in the Yanlanhaian Residential Community, Liuting Sub-district, Chengyang District, on the afternoon of August 19, 2022. Lu was arrested by officers from the Liuting Police Station. Lu’s home was ransacked. No further details are available.

People from the Dehui City Political and Legal Affairs Committee, Dehui City Education Bureau, Chaoyang Township Police Station, and the Chaoyang Township Government took Mr. Sun Yue and his wife Ms. Wang Xiujie to the township government on August 19, 2022. The officials threatened the couple and said that they would lose their jobs in government or state-operated enterprises if they refused to sign the three statements. The two practitioners refused to give in despite the pressure.

Mr. Ma Xiao from Nantang Village, Rushankou Town, Rushan City, Weihai City, Shandong Province, was arrested by officers from the Nanjing City Police Department in Jiangsu Province on June 22, 2022. He is being held in the Shijia Natural Village, Shuangjin Village, Chunxi Sub-district, Gaochun District, Nanjing City. He was arrested and held for more than 60 days.

Officers from the Chengxi Police Station went to Ms. Su Chengfang’s home at around 9 a.m. on August 16, 2022. They took out a form, asked her for her cell phone number and whether she had any spiritual belief. They also called and harassed Ms. Su’s husband.

The secretary of the Wuhou District Political and Legal Affairs Committee and officer Qiao Bo, from the Wuhou District Domestic Security Division, went again to the company where Ms. Xing Chen worked. They forced the leaders of the company to stop Ms. Xing from leaving. They claimed that only after she wrote the guarantee statement could she go home. If she did not comply, they would bring in her husband to persuade her. If she still refused to write it, they would also go to her home every day, and go to her child’s school to pressure her child to persuade her.

It was after 1 a.m., and Ms. Xing’s elderly father still worried about her and refused to leave. Under Ms. Xing’s strong protest, and out of fear that her father would develop health issues, the officials instead asked Ms. Xing to write a promise to obey the law, which she did, and she was let go.