(Minghui.org) This July 20, 2022 marked 23 years since the Chinese Communist Party (CCP) began to suppress Falun Gong (also called Falun Dafa), a peaceful cultivation practice based on the principles of Truthfulness, Compassion, and Forbearance. Practitioners held a series of events in Guadeloupe, an overseas region of France between July 17 and 24 to tell people about the brutality of the persecution, and to call for an end to the human rights violations taking place in China.

On July 24, at Plage Du Souffleur in the Port-Louis community of Nord Grande-Terre, Falun Dafa practitioners talked to people about the persecution in China and collected signatures on a petition that calls for an end to the persecution. This beach has been one of the few beaches in the northern Grande-Terre that had not been inundated with seaweed, so it is very crowded. 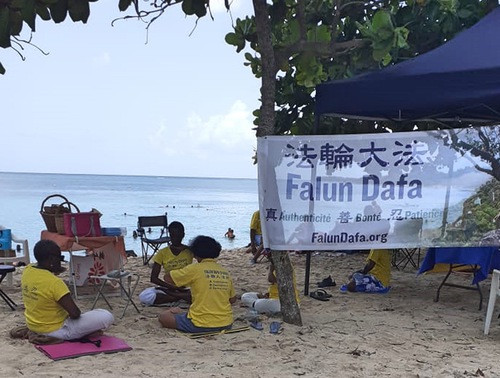 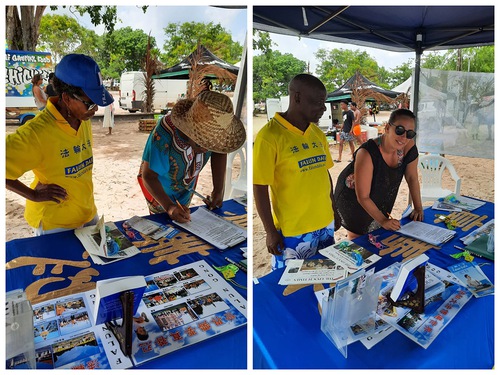 Visitors sign a petition calling for an end to the persecution in China.

Visitors to Souffleur Beach include European tourists, people originally from Guadeloupe returning to their hometown on vacation, and local residents. Practitioners walked from one end of the beach to the other, handing out brochures and collecting signatures on a petition calling for an end to the persecution. Many people expressed their desire to learn Falun Dafa and many signed the petition.

There was a traditional sailing event around Guadeloupe on July 17, ending at Plage de Roseau at Capesterre-Belle-Eau. Many tourists and locals gathered on the beach, enjoying booths selling juices, local foods, and handcrafts.

Many people were shocked to hear about the brutality of the persecution. They couldn’t imagine that there are state-sanctioned concentration camps and hospitals in China that harvest people’s organs to sell for a high profit for transplant surgeries. 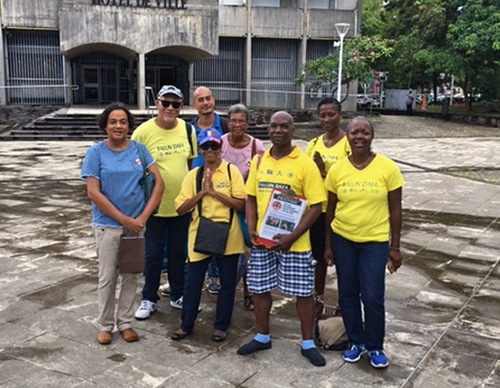 Falun Gong practitioners held a truth-clarification activity outside City Hall in Pointe-à-Pitre, and also on the surrounding streets on July 20, 2022.

Falun Gong practitioners held a truth-clarification activity outside the Pointe-à-Pitre City Hall, as well on the surrounding streets on July 20, 2022.

An older gentleman stopped by and said he hopes that the Chinese people would no longer have to live in fear, and could oppose the CCP dictatorship. A young woman signed the petition and took some fliers to give to her colleagues and friends.

The director of the Art Center, next to the municipal government, suggested that the practitioners might hold an exercise teaching activity there.

“High School Teacher: My Tribulation Dissolved After I Let Go of My Ego”