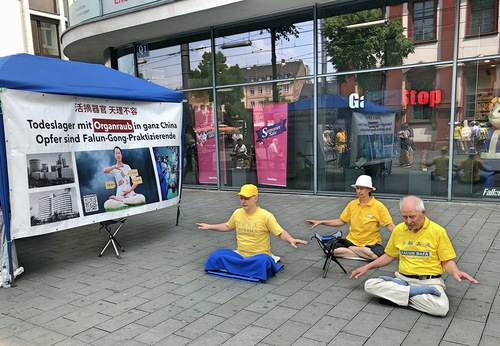 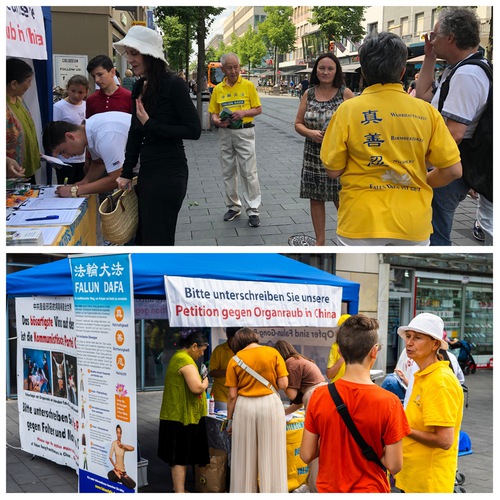 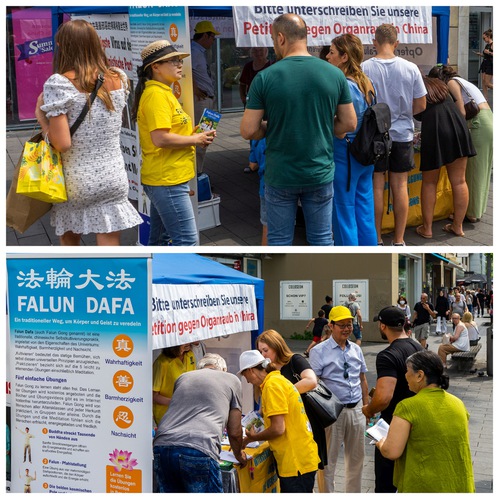 Passersby stop to learn more and sign the petition to show their support for the practitioners’ efforts to end the persecution.

After practitioners set up display boards about Falun Dafa and the persecution in China, several practitioners demonstrated the exercises while the rest distributed informational flyers. Their big banners showing the words ‘Live Organ Harvesting is Not Tolerated By the Heavens’ and ‘The CCP (Chinese Communist Party) is the Most Evil with its Virus Scourging the Whole World’ were hung on the left and right sides of the booth, and the banners were especially eye-catching. Many people stopped by to observe and read the information in detail. Some people chatted with practitioners and asked them about the persecution in China. 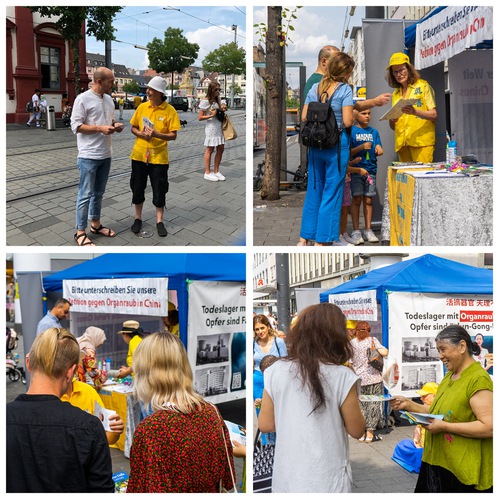 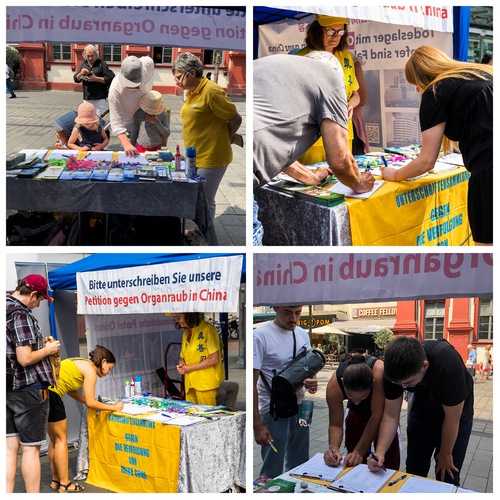 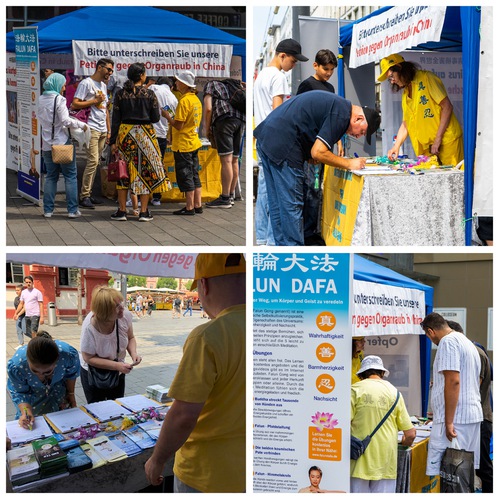 Passersby stop in their tracks to learn about Falun Dafa and sign the petition to show their support for the practitioners’ efforts to end to the persecution.

Resident: What You All Are Doing Is Great, Admirable

Anette pointed to the banner exposing the CCP’s state-sanctioned live organ harvesting from Falun Dafa practitioners and asked a practitioner in shock, “Is this for real? How could this kind of thing be happening?” The practitioner replied, “It is real and it is still going on in China today.”

Anette then asked, “Why have I never seen this matter being reported?” The practitioner replied, “The CCP used financial benefits to bribe western countries so they have all maintained silence about this matter. Western media is the same too.” Anette nodded her head in agreement.

The practitioner also told Anette, “We are here today to call for the persecution to stop soon.” He told her that the Falun Dafa practitioners held a large-scale parade in Berlin last weekend to raise awareness about the persecution and that she could find many related videos and articles about it online. Anette said, “That is great. Can you write the website on this flyer?” The practitioner thus wrote de.minghui.org and de.falundafa.org on the flyer.

Anette said that she is doing research work for a jewelry enterprise in Belgium. She said to the practitioner, “It is really unbelievable that such things are happening. I know that meditation is very good. Depriving a person of their freedom to make free choices is unacceptable to me. I think that the Chinese [CCP] government does not respect their citizens. This is very sad. Living here in a democratic country, we cannot imagine the things that are happening there. I sympathize with them from the bottom of my heart.” Anette pointed to the petition form and said, “I must sign this.”

The practitioner gave her a small lotus flower souvenir with the words ‘Truthfulness, Compassion and Forbearance’ written on it. Anette smiled and said, “Thank you for telling me about this matter, which I hadn’t heard of before today. I will go online to really learn more about this topic [Falun Dafa] when I go back. You all will definitely keep holding events here in the future too, right?” The practitioner nodded and said, “Yes.” Anette replied, “In that case, I will still get to meet you all. I will continue to pay attention to you all.”

Giving a Watermelon to Show Support

A lady said she was really upset to hear about the CCP’s live organ harvesting. She said that she is not a stranger to the totalitarian rule of a communist country. She came from Königsberg, which is the currently called Kaliningrad in Russia. After the Second World War, Königsberg was occupied by the Soviet communists.

She was very grateful to the practitioners for spreading the truth and telling people about the CCP’s evil nature, “What you all are doing today is great and admirable.”

The lady left, but then came back later with a watermelon. She said that she wanted to let the practitioners enjoy the watermelon and help them clarify the truth about the CCP’s live organ harvesting crimes to passersby.

A Turkish lady was very interested in the Falun Dafa exercises and asked a practitioner about what kind of fees are required to learn to practice. The practitioner told her that learning Falun Dafa is totally free of charge. The lady sighed and said that she had heard about Falun Dafa too late. She then asked for the address of the practice site in Mannheim and said that she will definitely go there to learn the practice.

Young Practitioner: International Students from China Need to Abandon Notions and Prejudices to Learn the Truth About Falun Dafa

Falun Dafa practitioner Zoe is studying for his Master’s degree at a university in Germany. Zoe had cultivated in Falun Dafa from the time when he was four years old with his father. But after the persecution started in 1999, in his memory, he no longer saw his father at home. “He led a displaced life. From 2002 to 2005, he was again illegally arrested and sent for three years of forced labor,” Zoe said.

“My father suffered from cruel treatment, such as freezing in cold winds of minus 10 degrees Celsius, shocking his private parts with electric batons, his teeth were pried out and his legs were scalded with boiling water. Both of his legs no longer function because they became deformed. He is now permanently paralyzed.”

Zoe recalled, “My father started to cultivate in Falun Dafa from the end of 1994 to the start of 1995.” Zoe said, “At that time, qigong was very fashionable throughout the whole country. On top of that, my father was suffering from serious asthma. It was so serious at the time that he almost lost his life. Later, through someone’s introduction, my father managed to buy a copy of the precious book, Zhuan Falun. After he started cultivating, he totally recovered from his asthma.”

Zoe said, “I hope that more people in western society can learn about this matter [the persecution of Falun Dafa practitioners] that is happening in China.” and “I also hope that people of the younger generation, like me, and the students overseas, can abandon their notions and prejudices to learn exactly what Falun Dafa is all about so that they can make a correct judgment.”

“Being a Good Actor to Validate Dafa”