(Minghui.org) Falun Gong practitioners from Houston held banners along Bellaire Boulevard in Chinatown on August 20, 2022, to celebrate 400 million Chinese quitting the Chinese Communist Party (CCP) and its affiliated youth organizations. A fleet of vehicles with banners on their roofs with the same message drove back and forth along the boulevard to inform passing by drivers of the information. 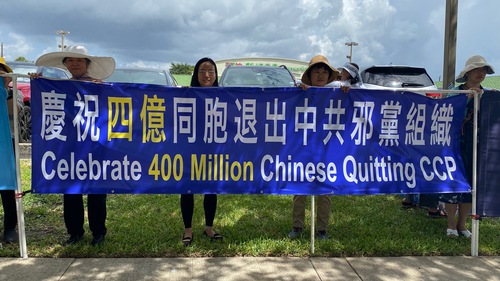 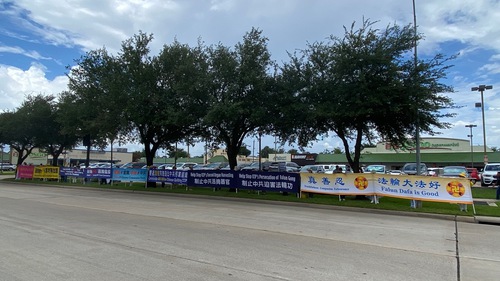 Volunteers in Chinatown celebrated the 400 million Chinese who have quit the CCP. 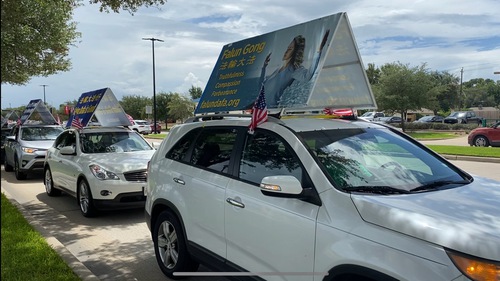 A fleet of cars with banners on their roofs.

Zhu, in his 50s, came to the United States from Henan Province, China. He took a flier from a volunteer, read it, and decided to withdraw from the Communist Youth League and the Young Pioneers, two organizations affiliated with the Communist Party.

Zhu said that he disliked the CCP’s persecution and oppression of good people. One of his friends petitioned to the government on a land usage issue. But his friend’s problem was not resolved. Instead, he was harassed and punished by the authorities.

A middle-aged western man saw the procession and banners from the parking lot, and asked a volunteer what the activity was about. After he got the answer, he pointed to a banner and asked what happened about the (Covid-19) virus. The volunteer told him that it was precisely because the CCP concealed the epidemic in Wuhan that caused the epidemics to spread throughout China and the world. Therefore, the rest of the world should recognize the evil nature of the CCP and avoid being deceived again. The man accepted a few fliers introducing Falun Gong (also called Falun Dafa) and informing people about organ harvesting from living practitioners, crimes perpetrated by the CCP in China.

A police officer told a volunteer that he was here to protect them, and make sure that the event proceeds without interruption.

Peng Tao, the event organizer and a volunteer helping Chinese people quit the CCP, said that it was the combined efforts of volunteers both in China and in foreign countries that resulted in 400 million people quitting the Party and its affiliated organizations.

Peng also said, “Brave volunteers risk their lives to spread the truth despite the CCP’s red terror in mainland China. A lot of people even lost their lives because of it, including some acquaintances of mine. I hope everyone will cherish their contribution.” Peng said.

Volunteer Diana used to go to the former Chinese Consulate in Houston to help Chinese people quit the CCP organizations. Some Chinese immediately wanted to quit the Party and its youth organizations, but some swore at her, telling her that she was not a patriot.

Diana said, “These people couldn’t tell the difference between the CCP and China. Over the years, people have become more and more aware of the evil nature of the CCP. They are also more aware that the CCP is not equivalent to China. More people have quit the CCP and it’s getting easier, too.”

After the Chinese Consulate in Houston was closed by the U.S. government, she joined other volunteers to make phone calls to China to urge people to quit the Party. More than 10,000 people quit the CCP organizations with her help.

Volunteer Ms. Wang Ying said it was very meaningful to help people quit the CCP, and she had a word for her folks.

“I want to tell my fellow Chinese friends that the (Communist) Party is not equal to the country, China. Whether we are American citizens, Chinese citizens, or citizens of other countries, we are descendants of China. Only by staying away from evil and keeping a compassionate mind, can you choose a bright future for yourself.” Wang said.

“Podcast (Cultivation): “Returning to the Heart I Had at the Beginning of My Cultivation””

Latest Podcast
Podcast (Cultivation): “Returning to the Heart I Had at the Beginning of My Cultivation”
- Aug 29, 2022