(Minghui.org) The Tian Guo Marching Band and waist drum team from Toronto were once again invited to participate in the Canada Day Parade in Mississauga City on July 1, 2022, which is Canada’s 155th National Day. The Canada Day celebrations were canceled the past two years due to the COVID pandemic. Grand National Day parades were again held in various cities this year. When the band and waist drum team passed by, many spectators cheered, clapped their hands to the rhythm of the music, and took pictures and videos. 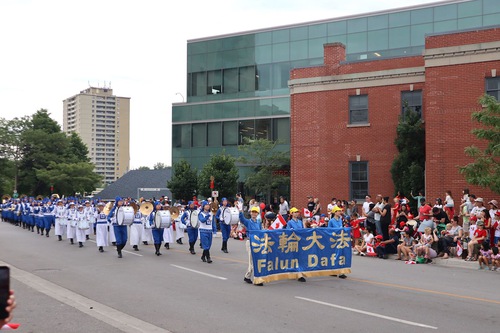 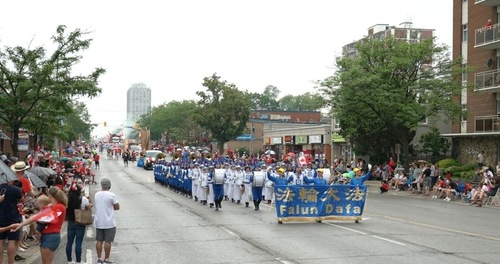 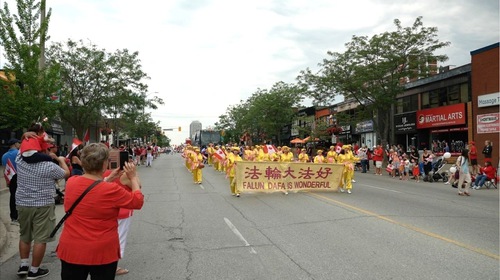 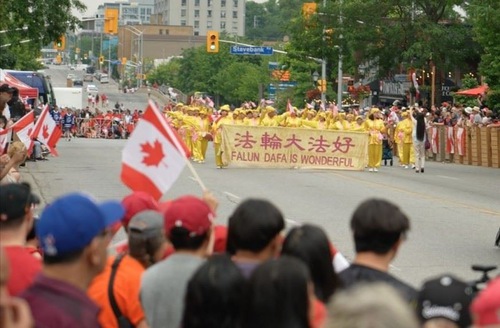 Chinese Canadian Agrees with the Principles of Truthfulness-Compassion-Forbearance

Ms. Huang, a member of a Chinese team in the parade, told a practitioner, “I saw your group (referring to the Tian Guo Marching Band) in the parade last year.” She explained that she immigrated to Canada many years ago.

“The Chinese Communist Party (CCP) is harming the Chinese people, especially the recent harsh “Zero-COVID” policy in China,” said Ms. Huang. “I can’t understand why it is doing this.” She also said that what practitioners say about the CCP’s persecution of all Chinese people is correct, “The CCP cannot represent China, let alone the Chinese people.”

She said, “The principles of Truthfulness-Compassion-Forbearance are correct. Now all kinds of fake products are appearing in China, including tainted vaccines and milk powders. The CCP is destroying the truth and kindness in the hearts of Chinese people.” She also said that people who uphold the principles of Truthfulness-Compassion-Forbearance are good for society.

Ms. Huang quit her membership in the CCP organizations with an alias and thanked the practitioner.

Ms. Baihe, another participant in a Chinese team in the parade, said, “I saw the Tian Guo Marching Band in previous parades. I knew that they were all Falun Dafa practitioners.” The practitioner clarified the truth to her and Ms. Baihe said that she was a Christian.

The practitioner told her that Christians should quit their memberships in the CCP organizations because the CCP is atheist. Ms. Baihe agreed and quit the CCP’s organizations she joined.

New Chinese Immigrant: Patriotism Does Not Mean Liking the Party

Ms. Lou, from Northeast China, had just arrived in Canada. A practitioner explained that the members of the Tian Guo Marching Band were Falun Dafa practitioners, and clarified the truth to her.

Ms. Lou agreed with the practitioner that real patriotism was support and help between Chinese people after they immigrated to other countries. She also agreed that patriotism means to love one’s own nation and one’s own countrymen. It is not the so-called “love of the Party,” and the CCP cannot represent China. She happily quit her membership in the CCP organizations she joined. 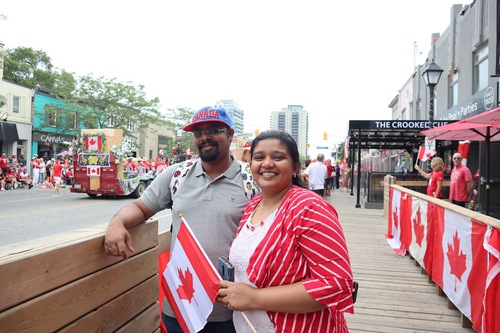 Parthiban and his wife Ieena watched the parade. They danced along with the music when the Tian Guo Marching Band passed by. Ieena said it was her first time hearing the band play and she really liked their music.

Ieena asked a practitioner what Falun Dafa is when she saw the banner with the words carried in front of the Tian Guo Marching Band.

After listening to the practitioner explain, Parthiban said that Falun Dafa was good. He was happy to hear that practicing Falun Dafa benefits people both physically and mentally. He said that Truthfulness-Compassion-Forbearance was helpful to society and he hoped more people will follow it. 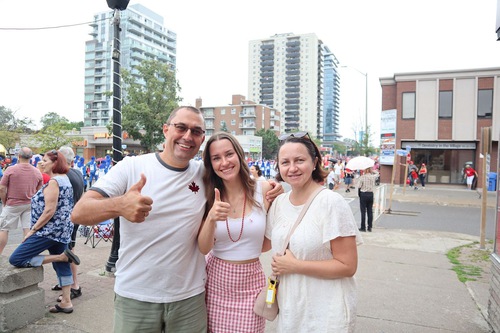 As Ivan’s family watched the parade, they clapped in time to the music of the Tian Guo Marching Band. They said that this was their first time hearing the band’s music, and the whole family liked it.

He also said, “It’s been two years without a parade, and I’m excited to have this event back. I hope to see the Tian Guo Marching Band next year, and even every parade in the future. They perform well!”

When they learned that everyone in the band practiced Falun Dafa, Barbara and Natasha said it was great as it could bring people peace, happiness, and joy.

“I Can Feel Strong Energy” 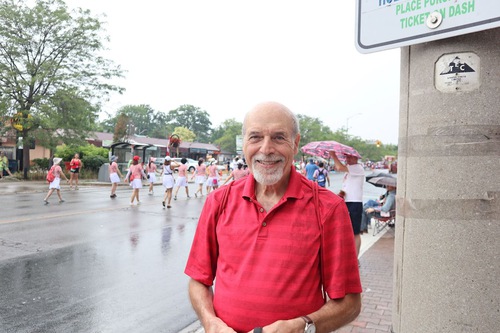 Mr. Sal said that he saw the Tian Guo Marching Band every year when he attended the Canada Day Parade. He said their music was dynamic and uplifting, “I can feel strong energy.”

When he learned that all band members were Falun Dafa practitioners and that they held a parade to celebrate Falun Dafa Day in May, Sal said, “It’s a pity that I missed it this year. I must watch it next year.”

Mr. Sal said that he knew about the CCP’s persecution in China, “I know that Falun Dafa is not allowed in China. This is what it (the CCP) does. I am happy that practitioners can come to Canada where they can freely practice their belief.”