(Minghui.org) The Chinese Communist Party launched the persecution of Falun Gong, a spiritual discipline with five sets of meditation exercises, in July 1999. Officers from Domestic Security in Changning District, Shanghai, have since been actively participating in the persecution of local Falun Gong practitioners.

Officers have arrested steadfast practitioners and classified their cases as major offenses. The numbers of arrests and transformation of the practitioners are linked to the officers’ annual performance and bonuses. As a result, the officers closely work with the Changning District Detention Center to torture and brainwash the practitioners into renouncing their faith. The torture means used in the detention center are as cruel as those used in forced labor camps and prisons.

The following describes some of the tortures used in the detention center. 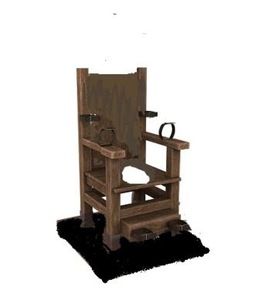 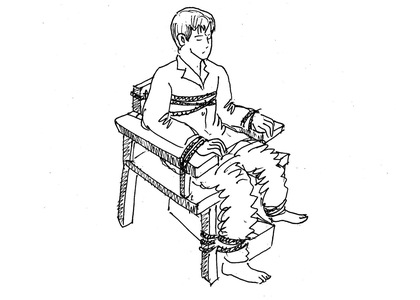 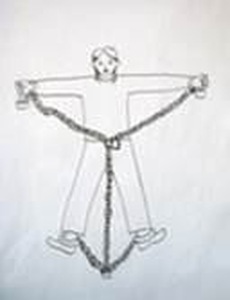 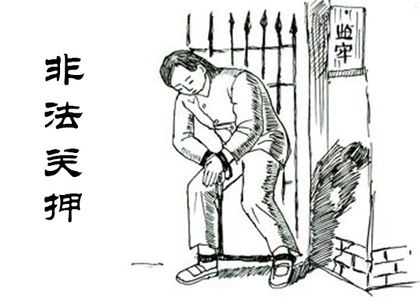 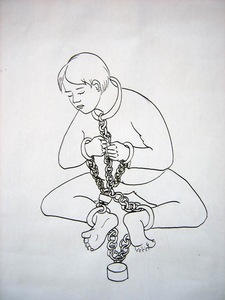 Torture illustration: The handcuffs and shackles are chained together or to the ground so that the practitioner can not straighten the upper body.

Tied and Immobilized to Metal Bed

The practitioners often went on hunger strikes to protest the abuse. The forced feedings involved guards immobilizing the practitioner to a chair, and inserting a feeding tube through the nose into the stomach. They stuffed dirty mops into the practitioner’s mouth to muffle any shouting. The guards had direct contact with workers in Changning District Central Hospital, and would torture the practitioners in the hospital if necessary. When the practitioner refused to eat for a long period of time, the guards sent them to Shanghai Prison General Hospital to intensify the torture. 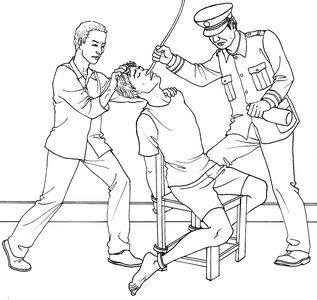 The guards talked to the practitioners in the name of psychological counseling. The details of the conversations were saved in the computers, and shared with the agents in the 610 Office and officers from the Domestic Security Office, so that they can learn more about the practitioners’ personal information and preferences. This is used to customize the brainwashing strategy to force them give up the practice.

Doctors from Changning District Central Hospital came to the detention center at least once a month to perform physical examinations on the practitioners, including drawing their blood samples. The authorities never explained why they gave the practitioners repeated medical exams, nor did they provide legal basis for that. Xiao Xiao, a director of the detention center, said that the amount spent on these exams added up to over a million yuan per year.

The guards carefully planned which cell a practitioner would stay in, with which detainees, and how the practitioner’s seat and bed were arranged in the cell. This was done so that the guards could better use the detainees to participate in the persecution.

Young Talent Tortured to Near Paralysis and Sentenced to Five Years

Mr. He Binggang from Xuhui District, Shanghai, has a graduate degree from Fudan University. When he was 15, he created a computer sound system to assist blind people in operating computers. He received the 6th Shanghai Yilda Young Inventor’s Award and a Silver Medal from the 6th National Invention Award. He was a certified senior software engineer at the age of 16. 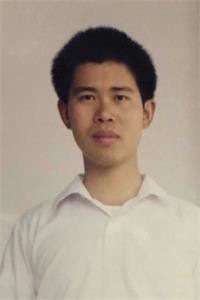 When Mr. He was still a graduate student in 2000, he was detained and given forced labor for refusing to give up his practice of Falun Gong. In 2001, the Xuhui District Court of Shanghai sentenced him to six years in prison. Mr. He was detained in Shanghai’s Tilanqiao Prison, and he was released in 2007. Afterward, Mr. He formed his own company, Yuwen Technologies.

Wang Yu from the Security Division of the Changning District Police Department sent an undercover plainclothes policeman on the morning on April 15, 2010, to sell a used computer to Mr. He’s company. Wang, dressed in plainclothes, waited upstairs in the building where Mr. He’s company was located.

After the undercover officer left, Wang changed into a police uniform and led a group of police officers to Mr. He’s company. They claimed that they had received a phone call from a witness saying that the company had a computer that had been illegally obtained. They searched the company and found a box of Falun Gong books and a DVD, which was placed by a police agent who applied for a job at his company. They arrested Mr. He and took him to the Tianshan Street Police Station, where they interrogated and beat him, trying to coerce him into admitting that the books and DVD were his. The beatings caused him severe spinal injuries.

In early July 2010, Mr. He’s neck and lower back injuries caused pain in his arms. He fell frequently anytime he tried to walk, but the doctor at the detention center did not send him for a check-up. In September, his arms became extremely painful. In November 2010, he was unable to walk normally. Mr. He had repeatedly requested an examination of his lower back, but was rejected.

He was unable to walk and became incontinent by March 2011. On March 14, 2011, the guards took him to a hospital and a doctor found that he had cervical disc herniation with spinal cord edema. On March 28, 2011, the authorities notified his family to take him home. He was released on bail awaiting trial. His family didn’t recognize him when they saw him, as he was pale, could barely stand up, and was unable to walk. 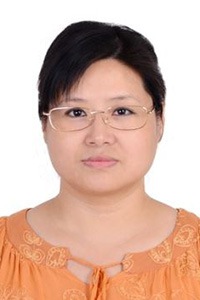 The police from Changning District arrested Ms. Zhang Ying on the morning of September 8, 2009. Ms. Zhang was at her mother-in-law’s home at the time of arrest. Her parents-in-law questioned the police, “Do you have any legal evidence for doing this?”

Officer Yang Ying replied, “We are arresting her for the purpose of interrogation – evidence will be produced later.” The police took her to the Xianxialu Police Station and interrogated her.

Inside the police car, Ms. Zhang began to have spasms and cramps. When the car arrived at Changning District Detention Center, four officers carried her out and threw her on the floor. The authorities in the detention center did not examine her health before admitting her. The next day she suffered a high fever. The guards dragged her into an office, stepped on her head, and forcibly injected her with unknown drugs. To protest the abuse, she went on a hunger strike. Three days later the guards put her in a hospital, where she was diagnosed with hypertension. She was hospitalized three times in the next six months.

Ms. Zhang refused to put on the uniform after she was discharged from the hospital. The guards locked her in solitary confinement and put her on a tiger bench. Her limbs were cuffed to the bench and her upper body fastened to the back of it. The director at the time, Wu Libin, threatened to bring everyone to look at her when she “relieved yourself in your pants.” The guards purposely blocked the hole in the seat normally used to relieve oneself. After Ms. Zhang went on a hunger strike, a guard told her that the doctors from Changning District Central Hospital “are ready to come over any time to force feed you.”

Seven days later the guards took her off the bench and put heavy handcuffs and shackles on her. The cuffs and shackles were chained together so that her upper body constantly stayed in a bent-over position. She could barely move, and couldn’t walk or use a toilet normally. The cuffs and shackles stayed on while she slept. This continued for a month. Her health deteriorated, and her weight dropped from 60 kg (132 lbs) to 35 kg (77 lbs).

The police at Changning District Domestic Security fabricated her case, testimony, and witnesses for her trial. The prosecutor sought a seven to ten-year prison sentence.

Ms. Fan Guoping, a Shanghai resident, retired from Shanghai No. 1 Radio Factory. When she worked in the factory, every year her supervisors gave her good evaluations. She was once awarded as a model worker of Shanghai.

In summer 2008, Ms. Fan, who was in her 60s, was arrested and detained at Changning District Detention Center. When she first went into the detention center, the guards deprived her of sleep for three days. She went on a hunger strike to protest the persecution, and the guards tried to force-feed her. The rough handling during the force-feeding caused her nose to bleed all night. Then-director Wu Libin used a thick rubber tube to force-feed her in order to intensify the pain and force her to stop the hunger strike. When the rubber tube wouldn’t slide into the stomach, Wu pushed down on her neck to force it, which caused extreme pain and almost choked her.

Ms. Fan still refused to renounce her faith. Wu thus ordered that she be put in a solitary confinement cell. Her legs were cuffed to metal railings, and her arms were handcuffed behind her back. When she wanted to use the bathroom, instead of letting her down, the guards had the prisoners catch her urine and feces with a basin. As her legs were tied up higher than the rest of her body, it made passing urine and moving bowels messy and painful. The messy condition drew a lot of insects in the hot weather. The insect bites left no smooth patches on her skin.

The torture lasted two weeks. To make it worse, Wu ordered not to let Ms. Fan use the washroom to wash up. At the same time, Wu forbade other detainees from buying food or daily necessities because she refused to give up her practice. This angered other detainees. Wu then had the detainees push her around after tying a towel over her face. At the same time they kicked and pinched her. After Wu was satisfied with the amount of abuse, Wu allowed the detainees to purchase food and necessities.

General Manager Chained to the Ground

Mr. Pang Guangwen, a resident of Shandong Province, was a general manager of a logistics company in Nanhui District, Shanghai. On the evening of April 27, 2012, officers from the Jiangsulu Police Station arrested Mr. Pang when he was handing out Falun Gong fliers. The police confiscated his computers, printers, and other belongings, and put him in the Changning District Detention Center. 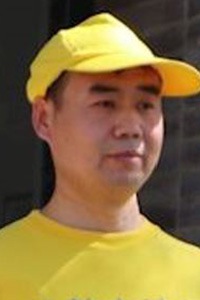 To prevent Mr. Pang from doing the Falun Gong exercises in the detention center, the guards shackled his feet and hands together, and chained the shackle to the ground. They forced him to wear a criminal uniform. To protest the abuse, he went on a hunger strike on May 22. Five days later the guards put him in a hospital and tied his limbs to a bed.

Mr. Pang’s lawyer came to visit him on May 24, 2012 and saw his client shackled to the ground. He asked why the guards treated Mr. Pang with such cruel measures. A guard said that it was because he did the Falun Gong exercises and shouted “Falun Dafa is good.” At the time Mr. Pang had been on a hunger strike and been force-fed for three days. The lawyer demanded that the guard take off the heavy shackles from Mr. Pang, but the guard refused.

“Organ Harvesting Forum in Brussels Press Club: The CCP Are “Serial Killers on a Massive Scale””