Despite the fact that cancer is still a difficult problem for modern medicine to overcome, many people have recovered quickly through the practice of Falun Dafa. Below are several such stories.

“My Gratitude Is Beyond Words” 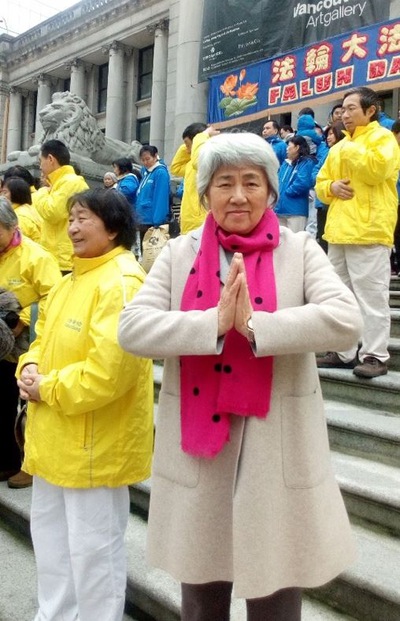 Ms. Zhao Yunhong, a resident in Vancouver, Canada, used to work as chief engineer of a large enterprise in China. When she started to practice Falun Dafa in 1997, she had a lot of illnesses, including rheumatism, liver failure, high blood pressure, and coronary heart disease. The most serious was lung cancer, which forced her to retire at the age of 45.

The first time when she read Zhuan Falun, the main book of Falun Dafa, she could not put the book down. She was up all night and finished reading from cover to cover.

She said that it was the first time she had seen someone explaining the principles of the universe and human cultivation so thoroughly. Ms. Zhao soon recovered from lung cancer and all other diseases.

Tears welled up in her eyes when she was asked about the benefits she’s gained from practicing Falun Dafa, “My gratitude is beyond words.”

Dying Man Comes Back to Life

Mr. Jiang Guobo, of Shandong Province, suffered from advanced cirrhosis of the liver and precancerous lung disease at 31. He saw many experts and tried various treatments, but to no avail. His liver disease was so severe that he felt he was dying soon. Consumed by the fear of death, he struggled with severe insomnia and panic attacks.

Words couldn’t describe Mr. Jiang’s joy when all of his diseases were gone three months after he took up Falun Dafa in June 1995. He couldn’t wait to return to his hometown and tell his relatives and friends about this amazing practice.

A month after Mr. Jiang picked up the practice of Falun Dafa, his father also joined him. At that time, the elder Mr. Jiang was dying of lung cancer, and he could hardly eat, just waiting for the end of his life in desperate torment. The grieving and helpless family even prepared his shroud.

But unexpectedly, the elderly man also came back to life thanks to Falun Dafa. In October 1995, he could even work in the field for the autumn harvest.

Following her son and husband, the younger Mr. Jiang’s mother also learned Falun Dafa. She was no longer plagued by poor health and started doing farm work like a young person!

Mr. Jiang said: “The miracle that happened to me and my parents can’t be explained by modern science. But our personal experiences testify to Falun Dafa’s supernatural healing power!”

Ms. Wang Yaqin from Shulan City, Jilin Province, was working in Changchun (the capital city of Jilin) when she felt unwell in August 2004. After taking an X-ray, she was found to have a tumor in her left lung the size of 3.3×3.5cm. Three months later, she went to have another checkup, and the result was the same.

She went through five chemotherapy sessions. She sold her house, spent all the family’s savings, and borrowed money to pay for the medical cost. Yet her cancer still metastasized. The oncologist told her that the type of lung cancer she had was very tough to treat, and most people spent a fortune but still lost the battle.

She decided to give up the treatment and returned to her sister who could take care of her. She learned from a neighbor that Falun Dafa has miraculous healing power and she decided to give it a try. In less than one week, her body went through enormous change. She was able to walk and she no longer needed a caretaker. One month later, she completely recovered! All the villagers witnessed the wonder of Dafa!

Mr. Yang Shengrong, a farmer in Langfang City, Hebei Province, fell ill in August 2007. He had a fever and generalized weakness. After being hospitalized for one month, instead of getting better, his situation got worse and he lost a lot of weight.

The doctor urged Mr. Yang’s daughter to take him to Beijing Chest Hospital for examination, where he was diagnosed with chronic granulomatous lung cancer, an incurable disease.

Having been practicing Falun Dafa herself, she urged him to try this ancient mind-body practice.

Mr. Yang began to read Falun Dafa’s teachings and did the exercise with his daughter. He regained his appetite one month later and was able to eat and drink again. Without taking medicine or getting injections, the pain went away, his energy came back and he had a glowing complexion. When he returned to his hometown, all the neighbors were puzzled: a dying man came home full of life; who saved his life?