(Minghui.org) Today's news from China includes incidents of persecution that took place in 10 cities or counties in 7 provinces, where at least 40 practitioners were recently persecuted for their belief. 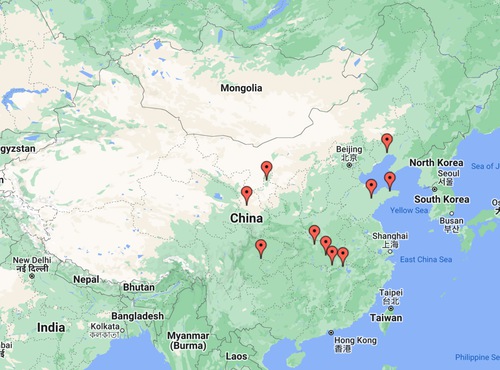 Ms. Yao Xiaoyan, 42, was tried by the Xixia District Court on June 21, 2022. She clarified the truth about Falun Gong in the courtroom, but the judge repeatedly stopped her.

Ms. Yao was arrested by officers from the Yongning County Police Department in her community on December 2, 2021. She was placed under criminal detention the next day. She has been held in the Yinchuan City Detention Center.

Ms. Yao was officially placed under arrest by the Xixia District Procuratorate on December 30, 2021.

Ms. Yao’s case was turned over to the Procuratorate for prosecution by the police department on February 28, 2022. The Procuratorate brought the case to Xixia District Court on March 31.

2. [Jinzhou City, Liaoning Province] Cases Against Three Practitioners Turned Over to the Procuratorate

The cases against Ms. He Xiaodan, Ms. Wang Ying, and Ms. Gong Lina were turned over to the Linghai City Procuratorate. The practitioners were arrested by officers from the Guta District Police Department and its subordinate police stations on May 12, 2022.

The three practitioners are still being held in the Linghai Detention Center.

Ms. Wang Fengqin from Gaomi City was arrested by officers from the Kangzhuang Town Police Station on the morning of June 24, 2022. Further information is pending.

Since mid-June 2022, the Muping District Political and Legal Affairs Committee (previously the district’s 610 Office) ordered Political and Legal Affairs personnel from all township and subordinate units, along with officials from village committees and officers from the local police stations, to pressure Falun Gong practitioners across Muping District to give up practicing.

Nearly 20 practitioners in Jianggezhuang Town, Longquan Town, Dayao Town, Wuning Town and the district’s urban areas have been harassed and persecuted to date. The officials resorted to implicating family members and other measures to force practitioners to renounce their belief.

If the practitioners do not give up their cultivation, they were told it will affect the next generation in their family regarding school enrollment, military recruitment, or taking examinations in applying for civil service positions.

The officials also threatened to put practitioners into brainwashing centers as a follow-up measure.

In order to meet the goals set by the Political and Legal Affairs Committee, officials did not hesitate to call practitioners’ children to return from out of town to pressure practitioners into signing statements.

Officers from the local police station, along with three members of the village committee, broke into Ms. Jia Xiuzhi’s home on June 30, 2022. Ms. Jia was in her 80s. They ransacked both floors of her house. They found a copy of Zhuan Falun and planned to take it, but Ms. Jia stopped them. They also confiscated some printed materials. They pressured her to tell them the source of the materials.

The officers arrested Ms. Tong Jinping, Ms. Tong Yinping, and Mr. Li Yilong. While ransacking the practitioners’ homes, the officers confiscated their Falun Gong books and audio players. Mr. Li’s cell phone and computer were also confiscated and have not been returned.

The three practitioners were taken to the Pencheng Police Station and held for three days. Mr. Li and Ms. Tong Yinping were released after they failed a physical examination. Ms. Tong Jinping has been held in Xiushui County Detention Center.

Officers from the Xining Police Station, along with seven or eight officials from Baosheng Township, went to Mr. Duan Jiyong’s home to photograph him on June 30, 2022. They then knocked on the doors of the homes of Mr. Gong Shuliang, Mr. Gong Shuxian, Mr. Gong Shufu, Ms. Duan Jinfang, and Ms. Gong Zhijun and harassed them.

Ms. Tang Gangying from nearby Jingui Village was harassed by eight police officers from the police station on the same day.

Mr. Song Guoli from Jingyuan County, who was held in the Lanzhou Prison, will be released in coming days. Zhang Tianyun (gender unknown) from Jiayuguan City, will also go home at the end of July.

Zhang was tortured in prison and became physically disabled. Zhang is now experiencing stroke symptoms. Zhang’s head is tilted to one side, and one of Zhang’s feet drags. Zhang can no longer take care of him or herself.

Ms. Huang Yefeng was stopped by the director of Hanjiang Police Station, and people from the 610 Office, the Political and Legal Affairs Committee, and the Fancheng District Police Department in her residential community when she was heading to the vegetable market on the morning of June 30, 2022.

They forced Ms. Huang to return to her home and ransacked the place without showing police badges. They confiscated Falun Gong books and several printouts of Master’s writings.

They took Ms. Huang to the police station to record her personal information, took notes, and released her after 10 a.m.